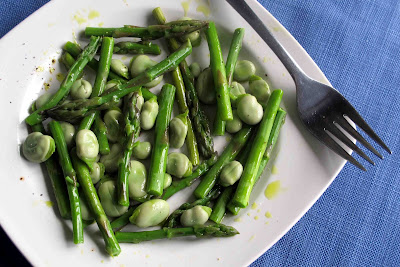 These three variations on an easy asparagus and broad bean salad grew out of the combined wisdom of three cooks: my neighbour Gill (who grew the broad beans) , daughter Rachel ( whose palate I can always trust) and myself.

As broad beans and asparagus both have assertive flavours I combined them, with a clove of smashed garlic, to make  a warm salad. I dressed it with avocado oil , a squeeze of lime juice , salt and plenty of freshly ground pepper.

It's become fashionable to peel broad beans but these ones, fresh out of the garden didn't need it as their skins were not tough. I simply had to squeeze them out of their pods.

The asparagus I used were young and thin .I chopped each stalk into three and then boiled the asparagus together with the broad beans for only a couple of minutes. After this they were sufficiently tender . Older broad beans and asparagus would need to be cooked for longer ( and separately if one was older than the other)

I  stirred though a clove of smashed garlic, arranged them casually on a plate and dribbled the avocado oil over it ( rather than toss it through) so that you could appreciate its golden colour. Then I squeezed some lime juice over the top and seasoned the salad. It tastes best served warm.

This is one of those useful  salads that you can play around with. I made the basic version and served it as a side for dinner. They tasted it, and came up with some new ideas.

For her variation Gill would add masses of chopped mint.

And Rachel, for version number three, would leave out the mint, and add cubes of feta, and maybe some chunks of canned tuna as well which would make it more substantial, a meal in itself.

Having such fresh ingredients did make a world of difference.And should there be any left over it can be kept in the fridge for a couple of days. In this case I would  dribble a little more avocado oil over before reheating for 30 seconds in the microwave. 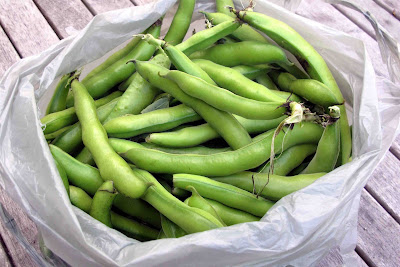 Gill's broad beans, freshly picked out of her garden and hand delivered.