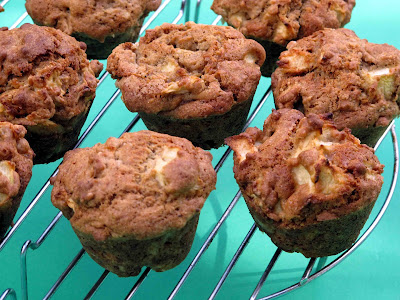 I baked these for Ann Marie , a Dutch visitor who was invited for morning tea today. Muffins are not a traditional Dutch recipe but Speculaas spices are.

Speculaas kruiden ( spices)  were first created in the 17th century in Holland when the Dutch East India Fleet were involved in the spice trade and brought spices to Holland from the Far East including cinnamon, ginger, pepper, cloves, coriander and cardamon.

Bakers began to mix these spices to create what became known as speculaas kruiden.In New Zealand Dutch shops sell this spice blend, and Equagold is now also blending it locally from imported product.

She really liked them so I'll post my recipe. Sinterklaas ( the Dutch festival of St Nicholas) will be happening on December 5 so I'll be using these spices again very soon

Add the eggs and vanilla essence to the oil and whisk togehter
In another bowl stir the sugar through the apples
Mix the apples into the egg mixture
Sift the flour, baking powder and baking soda together and add.
Stir the batter until it it just combined
This will fill 16 medium sized muffin tins which have been lightly greased.
Bake for 25 minutes at 180C.