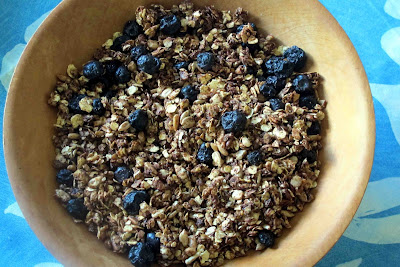 In a creative culinary moment this morning I designed a new muesli by  roasting  some organic chocolate coconut spread with  rolled oats and sunflower seeds. With the addition of a handful of dried blueberries it was moorishly crunchy and not too sweet.An added advantage was that it only took 15 minutes to bake.

The Zenian Organic Chocolate Coconut spread I used is made from coconut milk, coconut sugar and ground cacao. It has a low glycemic index of just 35.

Put the rolled oats and sunflower seeds in a bowl
Melt the Chocolate Coconut Spread for a few seconds in the microwave.
Mix it thoroughly through the rolled oats and sunflower seeds.
Spread the uncooked muesli out in a large baking dish in one layer. I lined the dish with baking paper.
Bake  for 15 minutes at 150C until the oats are golden (giving it an occasional stir). Watch it carefully towards the end. It can burn easily.
It will crisp further as it cools.

When it was cool I added a handful of dried blueberries. At this stage you could also add one or more of the following: dried apricots, raisins, cranberries, toasted almonds or walnuts.