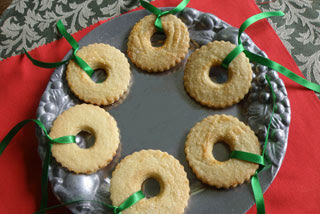 The Dutch don’t do anything by halves. Father Christmas comes twice! First up the first Father Christmas who is called Sinterklaas (St Nicholas) arrives in Holland on December 5. I remember him from my childhood as a tall imposing figure dressed in a red cape with a bishop’s miter on his head and saddled on a white horse.
Running alongside would be his servant Zwarte Piet (Black Peter) wielding a mattenklopper (carpet beater) to smack children who had been bad during the year, and throw small treats to those lucky ones who had been well behaved. Not PC by our standards today!
During the night, with his assistants, the good saint would ride his white horse on the rooftops and deliver children’s presents through the chimneys. St Nicholas still arrives by boat from Spain each year. His arrival is shown nationwide on Dutch TV.
St Nicholas was re-invented in America as the more jovial and rotund Santa Claus. Santa now also visits Holland at Christmas so kids get two lots of presents!
Neither country, however can lay claim to be the home of the original Santa. St Nicholas was actually born in Turkey, and lived from 280-342. Born into a rich family, but orphaned early, he spent his inheritance giving money to the poor and needy. He became the Bishop of Myrah and the patron saint of children and sailors. A folk festival was begun in his honour which was a time to celebrate but also to give to the poor.
When I was a kid I only knew about Saint Nicholas and had never heard of Santa Claus. Christmas for us was a Christian festival and a time to have a family get together. There were always real candles burning on Christmas trees. The soft flickering lights, and the smell of fresh pine leaves still linger fondly in my memory. Times change, Today Holland is largely a secular country and Christmas is generally celebrated with a special family dinner on Christmas day and presents under the Christmas tree.
Like immigrants from other countries the Dutch brought some of their food traditions with them to New Zealand and they became treasured family recipes. My mother’s recipe for banketstaaf (almond roll), a traditional Christmas treat is one I will be making again this year. The almond filling is similar to almond paste but it is a coarser mixture. It tastes better if you let it rest in the fridge for a few days before using. Then it is encased in flaky pastry and baked until golden brown.
The recipe is easy to make but beware! The first time I made it I didn’t seal the pastry well enough so as it baked the almond filling escaped all over the oven tray. Since then I have been more careful and made it again successfully.
The second recipe is for kerstkransjes (little Christmas wreaths). I like them flavoured with lemon and sprinkled with sugar, but they can also be decorated with flaked almonds or chocolate icing.
They are fun to make with kids, and they make great Christmas tree decorations, although in our house we have to hang them above dog height or our lab will sniff them out and demolish them!
Banketstaaf: Almond Roll
Amandelspijs (Almond Filling)
Ingredients
125 gm sliced almonds
125 gram castor sugar
1 egg
1 egg yolk
the grated zest of 1/2 lemon

2 tablespoons of lemon juice
Method
Whizz the almonds and sugar in the food processor till almonds are ground.
Tip into a bowl and add the egg, lemon zest and juice.
If possible wrap in glad wrap and store in the fridge for several days before using.
Banketstaaf
Ingredients
300 gm amandelspijs
300 gm flaky pastry
Apricot jam
Candied fruit
Method
Roll flaky pastry out to a rectangle (40 cm long, 10-12 cm wide)
Make the almond paste into a long sausage shape 3 cm shorter than the pastry so the pastry can be folded over it.
Roll the pastry around the almond filling so it is completely encased. Seal the joins carefully with water.
Put on an oven tray with the seam underneath.
Brush the top with some egg yolk.
Cook at 200 degrees C for about 25 minutes till golden brown.
Melt some apricot jam,
Brush jam over the top of the roll while it is still warm.
Decorate with some candied fruits.
Nicest eaten while still warm, but can also be served cold.
Kerstkransjes (Little Christmas wreaths)
Ingredients
160 gm butter
120 gm sugar
Grated zest of 1 lemon
1 egg yolk
250 gm flour
1 teaspoon of baking powder
A few drops of vanilla essence
Pinch of salt
Extra sugar for sprinkling ( I use Chelsea Organic Raw Sugar)
Red/green ribbon
Method
Put all the ingredients in a food processor. Whizz until small clumps form. Then put into bowl and knead into a ball.
Let the dough rest in the fridge for ½ hour.
Roll out to a thickness of 4 mm.
Cut with a fluted scone cutter into round shapes.
Cut the centres out (I use the top of a small bottle for this, but some cooks prefer the end of a wooden spoon)
Sprinkle cookies with extra sugar.
Put on a baking paper lined oven tray.
Bake for about 12-15 minutes in a moderate oven till just starting to brown..
Thread ribbon through when cold.
Hang on Christmas tree.