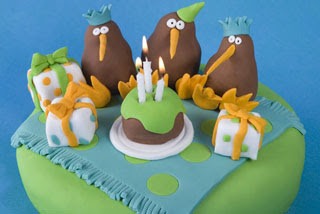 When I saw these seriously cute kiwis peering out at me from the cover of Party Cakes for Kiwi kids I wanted to take them home immediately and add them to my, collection. But my kitchen bookshelf is already groaning with an overload of cookery books, some of which are seldom used. It would have to be really useful!

I leafed through the pages and was entranced by the delightful photographs of 25 cakes, many decorated with a decidedly New Zealand flavour such as Jandals , Pacifica Mermaids, a Beach kiwi , a Birthday Burger, a Happy Camper and a Soccer shirt. Then there were fantasies like a fairy tale castle made with lamingtons and chocolate covered ice cream cones, and an erupting volcano cake dribbled with fiery red icing. A twisting line of cupcakes had been turned into a creepy-crawly caterpillar with lollie eyes and sour worms for the legs.

And there were cakes for those who simply love lollies, a bright yellow liquorice express and a treasure chest filled entirely with wrapped chocolates. For kids who love parties around a particular theme there was certainly lots to choose from!

Now a lollie cake is what we have always made at our house. I simply made or bought a cake, iced it and let the kids stick jelly beans, M and M’s and more of the same into the icing before it set. A few candles in between and, hey presto, we were ready to celebrate!

They usually turned out fine. But on occasion I had bought the wrong kind of cake. It fell apart as I iced it, and crumbs stuck to the icing. As I perused this book, I discovered there are ways to avoid such an unsightly mess, and recipes for the right kind of cakes which are easy to make.

There are 25 cake projects ranging from easy to more advanced. Each cake is accompanied by its photograph which looks very tempting. How to make it is clearly explained, step by step.

The authors take nothing for granted. Absolute cake decorating novices, like myself, are taken through the whole process. The book starts with the equipment you will need, how to colour and make sugar paste decorations and figures and how to cover a cake with it. Not every cake featured uses this ingredient, in some the more familiar butter cream is used.

As a family birthday was on the horizon I decided to take the plunge and move up from our basic lollie cake to a more superior model. My 3 grand daughters, aged 4, 6 and 8 were invited to participate (as 4 pairs of hands could be better than one, and help would be needed to lick the bowl). The occasion was their Mum’s birthday.

What we needed for cake decorating was easy to find. Bakel’s Pettucini white icing to make the sugar paste and edible glitter pens were in the baking section of our local supermarket. Why had I never noticed them before?

Three little icing sets, one for each helper, were bought from the Warehouse for under $3.00. Our local baker’s supply shop, D & B Bakery and Kitchenware had little packets of tiny edible hearts and flowers and the gels needed for colouring the icing.

But which cake should we make? Due to our lack of experience it seemed a wise move to start at the bottom end. We leafed through the pages. And there it was, on page 34. Our lollie cake, suitably named “Lollie Overload” but looking decidedly more glamorous with aeroplanes floating above it attached to pieces of cake decorating wire.

Now aeroplanes would not be quite the thing for their Mum, instead they thought flowers on stalks would look great. But although I had searched this wire was not to be found in our local shops, and this was one case where that New Zealand standby number 8 fencing wire just would not do!

We looked at more cakes. The girls thought the funky handbag would be just right for their Mum (but oh dear, no wire for the handle!) and they loved the Pacifica mermaid but one of them wanted to save that for her birthday later on in the year.

So we decided to be creative and use the ideas in the book in our own way, The chocolate cake from the book was easily made and the bowl was licked clean. Then we kneaded some gel into the icing to make it an adorable light purple. It stained their hands which was a little disconcerting, but it was easily washed off with soap and water. Next time we’ll remember to use plastic gloves. Then they took turns at rolling the icing out to a circle and draping it over the cake. So far, so good!

They used the glitter pen to write Happy Birthday and added stars and swirly patterns. It was fun! There was enough icing left over to model hearts or flowers but time had run out and the birthday girl was due to arrive any minute. Se the candles were quickly stuck in, just in time! And she said it was great!

It had all been much easier than we thought. Our cake decorating skills have definitely gone up a notch. And there can be no looking back now! With 25 cake-making projects to inspire them the girls will be grown-ups before they are likely to run out of ideas!

½ teaspoon salt
Preheat the oven to 180°C.
Line a 23 cm round cake tin with baking paper.
Place the butter and chocolate into a small metal or glass bowl and set over a small saucepan of barely simmering water. When the chocolate begins to melt, stir to combine it with the butter.
When the mixture is smooth, remove from the heat, add the sugar and vanilla essence and mix well.
Lightly beat the eggs and add them to the mixture along with the buttermilk or yoghurt. Stir well and transfer to a larger bowl.
Sift together the flour, cocoa, baking powder, baking soda and salt, then add this to the chocolate mixture. Mix well.
Spoon the mixture into the prepared tin and bake for about 50 minutes or until a skewer comes out clean. Transfer to a wire rack to cool.

Beat the butter in a small bowl with an electric mixer until it turns almost white.

Gradually sift in the icing sugar, along with a little hot water, and beat until you have a fluffy, light-textured icing.
Using a crumb coat
When you cut a cake to shape it you invariably create plenty of crumbs. To prevent these getting into your buttercream icing and ruining the finish, you may like to ice the cake with a ‘crumb coat’ first.
This is simply a thin layer of buttercream icing spread over the cake which will collect and hold all the crumbs in place. Leave the icing to dry for a few minutes before covering with your main and final buttercream coating.

Using templates
Templates for some of our cake shapes and decorative figures are provided in the back of the book. To make these motifs, cover the template with a sheet of baking paper. Knead the sugarpaste until it is soft and pliable, then place an appropriately sized ball of it in the centre of the template shape (visible through the baking paper). Use your fingers to mould the sugarpaste to fill in the outline. Place on the cake immediately or store in plastic food wrap until needed.
To cut the cakes that use a template, trace the template onto baking paper and cut out. Place this pattern on the cake and cut around the outline with a serrated knife.