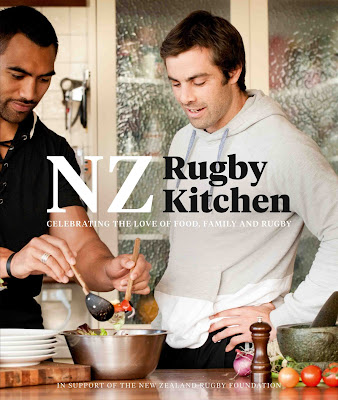 I wrote this review for the GrownUps website . It includes a great recipe for Roasted Snapper with Israeli Couscous from Al Brown's Go Fish.

Thankfully a man in the kitchen is no longer a rare sight. While some are there out of sheer necessity due to divorce or widower hood, others simply enjoy whipping up a meal by themselves.

Last year when I was working full time and my partner part-time it was such a pleasure to come home to one of his dinners. But after a steady diet of roasts and sausages (his favourite meals) it is time to extend his repertoire.

I could create a file for him of easy recipes. But this takes time. So a recipe book with accessible man friendly recipes is an easy way out. The New Zealand Rugby Kitchen (celebrating the love of food, family and rugby) fits the bill very nicely.

Inside is a wide range of dishes from the likes of Richie McCaw, Piri Weepu, Dan Carter, Jerome Kaino and Conrad Smith. And it is also a walk down memory Lane with recipes by Colin Meads and Waka Nathan.

It's great to see rugby players as role models in the kitchen as well as on the field. They look happy, relaxed and confident as they chop, stir the pot, barbecue and do the dishes.

When I showed this recipe book to my partner his eyes began to gleam as he leafed through the pages.

"Really good recipes," was his verdict. Some I knew he would immediately want to cook such as

Some of the recipes would have to be only occasional treats. Richard Kahui uses 500 ml of cream to make his Sweet Chilli Mussels. This is probably fine for players who are into regular strenuous physical exercise out on the field. But if my partner took a fancy to this recipe I'd be encouraging him to go to the gym more often.

Rugby players are a carnivorous lot.While there are chapters on pies, beef, pork and lamb as well as seafood and poultry it does seem a shame that there is no vegetable chapter. Tane Norton's Bacon and egg pie also includes tomatoes and four bunches of fresh spinach. And Jarrad Hoeata's Thai Green curry is swimming in beans and broccoli as well as chicken in a coconut broth.

But to ensure that the man in your life cooks a balanced meal it would be a wise to teach him how to toss a good salad and  cook seasonal vegetables.

For first time cooks there are some incredibly easy recipes like Ben Frank's Easy Apricot and Mustard Pork Chops which has only 4 ingredients.

But once blokes have mastered these they will be ready to go on to further heights such as Andrew Hore's Venison with Beer and Port (a stubbie of beer needs to be sacrificed for this. Andrew recommends Speight's as any good Otago man would)

Or they might like to master that sixties party favourite Beef Wellington chosen by Victor Vito. This is a particularly gorgeous recipe inspired by Gordon Ramsay. And if they are fishermen they may like to transform their catch into Conrad Smith's Roasted Snapper with Israeli Couscous which is a fantastic Al Brown recipe.

In my experience Celebrity cookbooks can be disappointing, great to look at but once you try out the recipes they don't necessarily work. Thankfully behind every man in this book was a good woman by the name of Kathy Paterson (a trained Cordon Bleu Chef) She tested the recipes and created some great food for this book ensuring that they are not only tasty but fool proof.

If you do decide to give this book to the man in your life you'll be winning three ways. He will happily move into the kitchen and cook the dinner more often. You get to sip a glass of wine and put your feet up until dinner is served. And you'll also be contributing to a worthy cause. All the royalties from this book are going to the New Zealand Rugby Foundation which supports badly injured rugby players.


For the Israeli Couscous

Place all the marinade ingredients, except the fish, in a food processor and process to a rough purée.

Make 3 slashes, through to the bone, on each side of the snapper. Place in a large, oiled roasting dish. Brush over most of the marinade, brushing well into the scored flesh on both sides as well as in the gut cavity. Cover and place in the refrigerator to marinate for at least 2 hours. Keep any remaining marinade for cooking the snapper.

Place a large saucepan over a medium-low heat and add the butter, onion, garlic, lemon zest and currants. Cook for 10 minutes, stirring occasionally, until the onion is soft and golden. Add the saffron with its liquid, and the lemon juice and paprika. Cook for a further 5 minutes. Add the couscous, stir, then add the hot stock. Cover with the saucepan lid and cook for 8–10 minutes. Stir through the knob of butter and the chopped parsley. Keep warm or cool then refrigerate and carefully reheat for serving.

Place the whole snapper on a large serving platter with the Israeli couscous to one side.