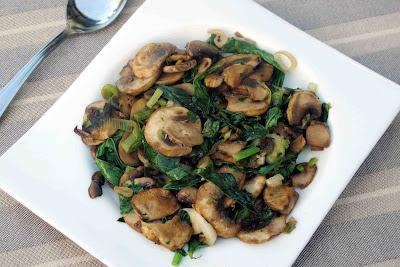 I have two people to thank for this dish: My neighbour Gill who bought a little bunch of broad bean tips from her garden for me to try and Nigel Slater, renowned British Cookery writer and gardener. His recipe, published in The Guardian March 30, 2008 (online) included them as one of the main ingredients..
You need to grow your own broad beans or have a generous gardener as a friend to get some broad bean tips for this recipe. I have never seen them for sale.
Nigel Slater describes them as a spring treasure for gardeners who grow them with a flavour which is something of a cross between that of a mild broad bean and young spinach leaves.Removing the tips from broad bean plants helps rather than hinders them, and will encourage the pods to fatten up.
I would, of course, have followed his recipe exactly as he's a great cook but there was a hitch. I only had one handful of broad bean tips and his recipe stipulated four so I was nowhere near. I proceeded regardless and created a recipe that had proportionately more mushrooms and garlic and far less broad bean tips.Although the balance of ingredients had been changed markedly the flavour combination was still really good. This recipe makes  a small quantity, just enough for two.
Before starting this recipe do rinse the broad bean tops  and shake them dry
Ingredients:
1-2 tablespoons of olive oil
2 spring onions ( white parts only, finely sliced)
2 cloves of garlic ( sliced)
2 cups of sliced button mushrooms
25 gm of broad bean tips
Warm the olive oil in a frying pan and cook the spring onions and garlic over a moderate heat until they have softened and are golden in colour.
Stir in the parsley and mushrooms.
Keep frying until the mushrooms are golden brown.( You may need to pour in a little extra olive oil if the pan is too dry)
Add the broad bean tips . Cook very briefly until they begin to wilt and darken slightly in colour.
Serve at once while hot and sizzling.
Season to taste with salt and freshly ground pepper. 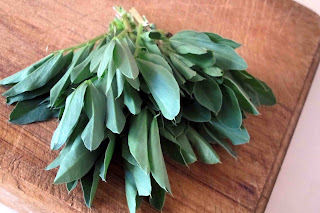