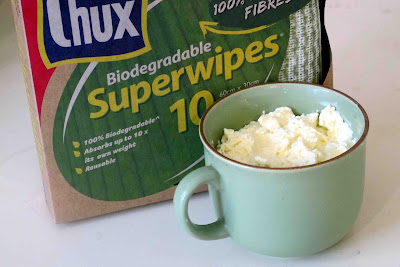 I wanted to make some rich ricotta cheese to fill some of those large pasta shells called conchiglioni rigati. So I googled for a recipe and arrived at

This sounded easy and delicious.
She used

I heated the milk, cream and salt in a large saucepan and stirrred it from time to time as directed to prevent the milk scorching the bottom of the saucepan.It was meant to go up to 190F but I didn't have a candy thermometer so I had to take a guess. I kept the heat up until there were some tiny bubbles around the edges and a skin had formed over the milk. Then I removed the pot from the heat, added in the vinegar and  slowly and gently stirred it a couple of times before leaving it   alone to sit for 5 minutes.

I didn't have a cheesecloth so I rummaged around and found a packet of chux superwipes which I had bought because they are made from natural fibres and are biodegradable. And the packaging is made from recyclable cardboard on which soy-based printing ink has been used so environmentally friendly

I doubled 2 wipes up and laid them on top of each other in my kitchen sieve which I rested over a large bowl to catch the whey.

It looked alarmgly liquid as I poured it in but as it drained I could see the cheese taking shape. I wanted it reasonably firm so I meant to leave it for two hours but I totally forgot about it didn't get back to it until four hours later. By this time it had miraculously turned into a thick, spreadable creamy mild ricottta.

It said it would make 1 generous cup of rich ricotta and it did.Most of it is left for filling my conchiglioni rigati but it proved too irresistable . I just had to scoff some  of it on slices of toasted  ciabatta with a drizzle of olive oil, salt and freshly ground black pepper.