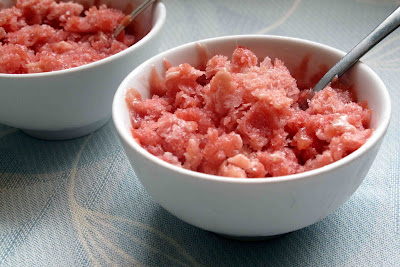 Pinning my sister Kartini down to the exact measurements for this refreshing,  frozen rhubarb dessert was a bit of a mission but I finally got there by following her around with a pair of kitchen scales and my cup and spoon measures. It was well worth it. The orange water is what makes it special but if unavailable use lemon juice.

After picking some rhubarb out of our garden, away she went.

So here is her Rhubarb Sorbet (or as she calls it Rhubarb Spoom)
From a recipe which she found in a magazine some years ago, but the exact source has slipped her mind. She has adapted it over the years and uses much less sugar.


Bring the water to the boil and boil the rhubarb for 5 minutes (or until soft). Add two tablespoons of castor sugar.
Take off the stove and puree with a stick mixture. It should be really smooth.
Add 1 tablespoon of rose water. (Or  11/2 tablespoons if you want the flavour of the rosewater to be stronger)

Beat 3 eggwhites until they are stiff. Gradually beat in 3 tablespoons of castor sugar.
Fold the rhubarb in until well mixed.

Put in the  freezer until frozen.

Kartini likes to take this out 1/2 hours or so beforehand and puts it in the fridge to let it soften a little.

I like to serve it straight out of the freezer and scrape little shards from it with a teaspoon. Either way it's good.
Or put some strawberries marinated in orange juice in a bowl and top with some rhubarb spoom.