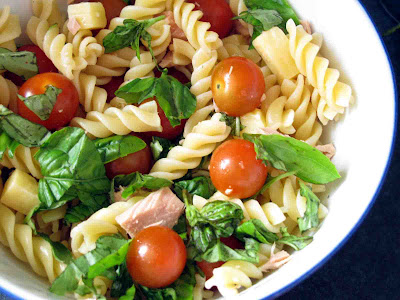 The day my 6 year old granddaughter took one mouthful, pushed her plate away and said in her disarmingly frank way “If I eat this I’ll vomit”, was the day I stopped trying to cook special and creative dinners for them.

Now I stick to familiar food that they are comfortable eating, not too complicated or spicy. I imagine they will develop a taste for these kinds of foods later.

In my experience you can’t go wrong with perennial favourites like roast chicken or barbecued sausages. They’re evergreen family favourites and I can’t imagine them ever growing out of them.

Kids are creatures of habit. They like repetition. They love my easy version of spaghetti bolognaise. “It’s so nice,” they say, and look forward to eating it every week. So easy they’ll soon be able to cook it for themselves.

The tuna pasta is one their Mum devised one day using nothing more than a can of tuna, 1 packet of pasta, some cheddar cheese and a punnet of cherry tomatoes.

Alex from the butchery department in Ponsonby’s Nosh gave me the chicken nibble recipe late one afternoon when, on the way home from work, I was looking for a dish that was inexpensive and would effortlessly feed many. It is now one of their regular meals.

Vegetables are another matter. If two like cucumber one will not. It’s the same with most other vegetables. Few have their unanimous support.

The way I solve this in summer it to fill a large platter with rows of raw vegetables, carrot sticks, rounds of cucumber, chunks of iceberg lettuce and sliced tomatoes and avocado. They can choose what they like and have a spoonful of mayonnaise on the side if they wish. This works well and there’s seldom any left over.

And for dessert there’s always fruit and sometimes ice cream. For a specially decadent treat I keep a couple of tubs of Holy Moly ice cream in the freezer which are like whacky ice cream Sundays. My grandkids especially love the Meringue A’Tang ice cream which is a mixture of vanilla Ice cream, lemon curd Ripple, smashed pavlova and pie crumble. The Orange ice cream is another favourite . It’s a mixture of orange ice-cream, choc ripple, and smashed round orange chocolate lollies. Hide this flavour from any adults who are old enough to remember the days of rolling jaffas down the aisles in picture theatres, or they may demolish it before the kids get their share.

The following are more like shortcuts than recipes, but they work so they are very useful for feeding grandkids. For any accompanying adults I would add a few extra ingredients.


Boil enough pasta in salted water to feed whoever is coming to dinner and drain.

Drain off most of the oil first, but leave just a little to keep this dish moist.

Stir is a generous amount of small cubes of cheddar cheese

For adults: Stir in some pitted olives and plenty of torn basil leaves.

Pour in a jar of your favourite pasta sauce.

Let it all simmer for about 10 minutes until the mince is cooked and the liquid has reduced a little.

Boil some pasta in salted water.

Ladle the spaghetti bolognaise over the pasta in each bowl.

Serve garlic bread alongside. Make this the quick way by slicing a loaf of French bread horizontally, then cut into smaller pieces. Spread with garlic butter and toast under a hot grill till the butter melts and the bread becomes crispy and brown. Watch carefully, it can burn easily.

For adults: Add some finely sliced mushrooms when you are cooking the bolognaise . Use grated parmesan rather than cheddar on top.


The quantities are flexible. Simply put as many chicken nibbles as they will eat in a bowl. Pour over sweet chili sauce and stir to coat.

Bake in a moderate oven for about 20-30 minutes until done.

For adults: In a frying pan (no need to add oil ) toast some sesame seeds until they are lightly browned. Sprinkle these liberally over the chicken nibbles (some grandkids may also like these, but ask first!)