Baked Snapper with a Japanese Twist 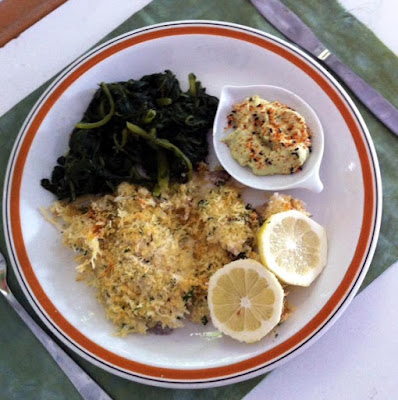 After our recent visit to Japan I'm loving playing with Japanese ingredients. So when Rod and Rachel generously shared some of their freshly caught snapper this is what we had for dinner,

First I rubbed smidgen of olive oil onto 3 large snapper fillets and laid them in a baking paper lined oven dish skin side down,

I generously covered them in a mixture of 1 cup of panko breadcrumbs, 1/2 cup of parmesan cheese, 2 tablespoons of chopped parsley and 3 tablespoons of melted butter. This mixture was gently patted down.

The fillets were baked for 15-20 minutes in a moderately oven by which time the panko crumb mixture was lightly browned and the fish was done.

Alongside the fish I served a spicy dressing made by stirring a large dollop of Japanese Kewpie Mayonaise into a mashed avocado and adding the juice of a lime. To add some heat I sprinkled some nanami togarashi on top . These are little flakes of assorted chili peppers .

Spinach:
A bunch of spinach from the garden was destalked, washed, roughly chopped and steamed in the water clinging to the leaves. A few drops of sesame oil were stirred in at the end,


The following night we had snapper again and as I had an opening to attend I made an even easier recipe by ( after oiling and seasoning the three fillets with a little salt) I smeared a thin layer of sour cream over them and sprinkled plenty of nanami togarashi chilli flakes over. Then I sprinkled over a mixture of breadcrumbs ( 1 cup) and finely grated parmesan ( 1/2 cup) and 2 tablespoons of olive oil
This mixture was then lightly sprinkled over the snapper ( You may well have some over) Bake as in  the previous recipe.

We celebrated the beginning of the festive season by a tasting of four of Mike’s Organic Beers the other night when we had a few friends around for dinner (One of whom is called Mike). 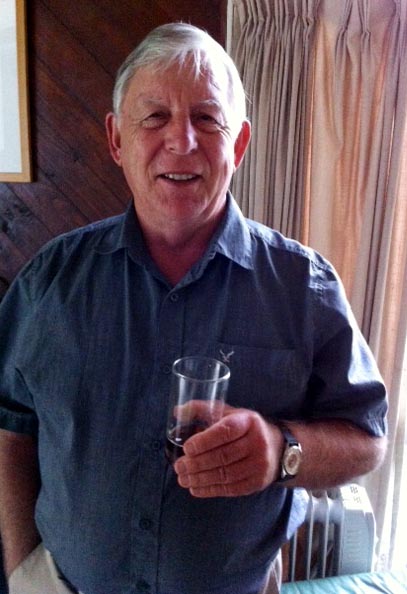 Here's our Mike!
We generally liked all the beers, and our notes are below
Mikes Dark Mild Ale. We started off with this one and found it a refreshing lighter style beer. It had nice toasty characteristics
OMPA Pale Ale. This was the second choice of all of us. We found the beer had a nice citrus nose, was a refreshing taste and was good drinking. Highly recommended.
Without Warning India Red Ale. An enjoyable ale, but most of it found it to be a stronger flavour than we are used to drink.
CMS Chocolate Milk Stout. The favourite of all of us. The stout was sweet, and did have a genuine chocolate taste. It was smooth and we were looking for more at the end of the tasting.

All in all, a great way to start the evening. And a good choice as Mike's Beers are organic and are NZ made  by a family owned company of beer brewers from Taranaki.
To find out more do go to
www.organicbeer.co.nz