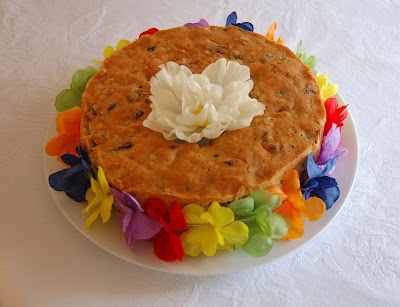 Years ago, when my new sister in law Angela arrived in New Zealand it must have felt really strange for her to have a winterless Christmas. She brought with her a love of traditional British Christmas fare, including of course the cake!

She baked a new recipe which she found in a newspaper column in the eighties. It had a foot in both cultures. Alongside the traditional sultanas and nuts there were tropical dried fruits including pineapple and pawpaw. It made a nice culinary statement about where she had come from and where she had recently settled. You could call it a Pacifika Christmas cake.

For this cake you don’t soak the fruit before baking but toss it in the flour which no doubt prevents it from sinking to the bottom. It’s laden with fruit and nuts. No spices but the mixture of 4 essences gives it a subtle and complex flavour. To bake it at that time she would have used greaseproof paper, but I’d use baking paper. No need to grease and so easy to use. But it’s still important to use a double layer of it to prevent a charred bottom.

She made it again three decades later to welcome her daughters who will be home from America and Brussels for Christmas this year.