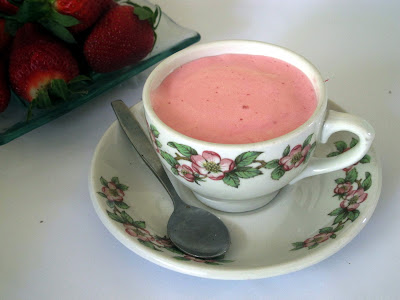 This is a tale of two puddings . It started badly. I made this strawberry mousse ( alias a golden oldie called jelly whip) for my granddaughter's birthday, To make it a little more girly and exotic I added some rose water. Bad idea! Only one person showed any appreciation and that was my granddaughter Emily whose face lights up at the very thought of any dessert and has been known to cheekily calls me Grandma Pudding. How embarrassing to be caught out at a birthday dinner! Should always try first.

My sister in law Alison, who was there, has now put me right. She makes this dessert two ways and without rosewater. The lemon one, she says, is the best as it tastes like a proper mousse should with the sharp citrussy flavour of the lemon cutting through  the sweetness of the jelly.  To make it more fruity she adds some sliced strawberries to the pink mousse.

For these recipes the evaporated mik has to be very well chilled. Overnight in the fridge is good. The jelly has to cool down completely in the fridge, just to the point where it is ready to start setting.This means watching it carefully.

The  first time I made it I didn't.So it set completely.With a few bursts in the microwave it was easily turned into a liquid again.Then I did watch it carefully until it was almost set.

Each of these desserts makes enough for 6 servings in pretty teacups or smallish bowls but the recipe can easily be doubled.