Butter Chicken from the Westmere Butchery 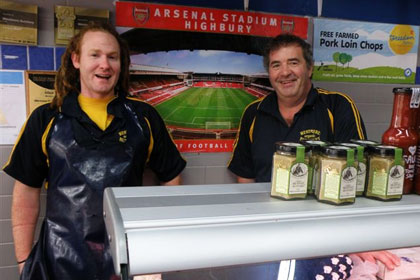 ﻿
Butter Chicken is the favourite recipe of one of my granddaughters. I only cook it to indulge her very occasionally as it is swimming in cream, but this is what makes it taste so good. Here is the recipe from the Westmere Butchery We’re Not Firefighters 2010 Calendar . I interviewed them some time ago but they're still going strong.
Ingredients:
Method:
In a large frying pan melt the butter and gently cook the garlic and onion until tender. Increase the heat and add the nutmeg, turmeric, cumin and chicken to the pan, Cook, stirring for 5 minutes Add the tomato paste, garam masala and sugar. Stir until well combined. Pour in the cream and simmer for 15 minutes until the chicken is thoroughly cooked. Serve with coriander leaves and steamed rice.

Here is the original story:

As you enter the Westmere Butchery you can’t fail to notice the large Arsenal Football Club poster on the wall behind the counter. It’s obvious that there’s more to life than making the perfect banger for these guys. There’s some ardent supporters here and they are keen to let you know it.

The Westmere Butchery is a real butcher shop where the meat is prepared on site. The customers, of whom I am a regular, come because the meat tastes so good, it’s not too expensive and the staff is very obliging. You can ask for a specific cut. As they do all their own carcasses they are happy to do it for you.
They are passionate about producing quality meat. Their steaks can be boned, vacuum packed on the spot and then allowed to age for 2 weeks before selling, making them juicy and tender. They also cure their own bacon and have a smoker out the back.
They have a great selection of organic and free range meat, some of it in their own spicy marinades like their kebabs and chicken pieces. What they are best known for, however are their sausages, to which my partner is exceedingly partial.
His favourite, the award winning beef sausages. These, as well as the Toulouse won gold in the 2009 Great New Zealand Sausage competition which draws entries from all over the country, from small owner operated businesses to large producers.
The judges proclaimed them to be an outstanding example of the classic beef sausage. The reasons: they were in a generously filled casing, carefully seasoned and texturally very attractive. They had a fresh aroma, great colour and consistency of size and shape and a true beef flavour.
But what's the secret behind these sausages? They first start with quality meat, with just enough fat (about 20%) to keep them juicy. No gristle or bone chips of course. Then in go their special mixtures of seasonings before they are stuffed into their casings. A couple of days in the chiller sees them right. It allows the flavours to mingle. The end result is their prize winning sausages.
These sausages deserve to be cooked with care. You don’t need to boil them before they go on the barbecue. And don’t prick them; just cook them nice and slow. That way they won’t split.
In between a rush of customers I had a quick chat to two of the butchers. They have worked there for quite some time and intend to stay.
Their boss, Dave, the most ardent of the Arsenal fans, is English but lived in South Africa for 20 years. There he developed a taste for boerenwors and biltong which the Westmere butchers now make for their South African customers and which other New Zealanders are also developing a taste for.
Douglas has worked there for five years, and is now a qualified butcher He says that the best way to learn his trade was on site, which he did.
Les had been here for six-and-a-half years. Previously an engineer with the London Fire Brigade, he couldn’t be happier with his change of career, and the pay is better.
For the butchers it's a full-on working day. The first person is there by 5am and the last person is not out until 1-2am the following morning.
You'd think the long working hours would make the staff grumpy, but no, it's a great working atmosphere, and that’s how they like it, full of laughter, and that kind of quirky English humour. Doug tells me that out the back there’s a constant flow of typical butcher jokes, which being the gentleman he is he declines to share with me.
But I can take a look at their rather wicked tongue in cheek “We’re not Firefighters Calendar” in which Hugh, Pugh, Barney Magrue, Cuthbert, Dibble and Grub (their stage names) bare rather a lot, to raise funds for the Guardian Angels, a trust that provides support for terminally ill children and their families which are financially disadvantaged.
Being a foodie my eyes are, of course, immediately drawn to the recipes in this calendar which includes such tantalizing dishes as barbecued butterflied leg of lamb, butter chicken; stir fried pork in lettuce parcels, Beef Guinness and mushroom pies and Sticky Asian oxtail.
It’s making me hungry. I’m out of here with my meat! This week it’s an organic chicken, some mince and of course those sausages which my partner will be exceedingly happy to see on his plate tonight served with mash while he watches a game on the telly: The perfect match!
The Westmere Butchery can be found at 131West End Road, Westmere, Auckland
Posted by Shoot and Eat at 10:35