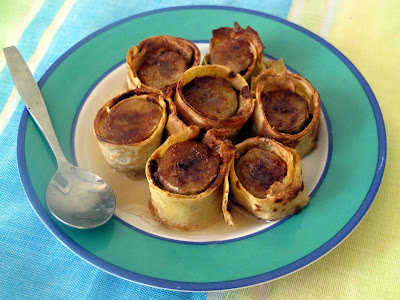 I've been working to create the perfect banana pancake  and this is what I came up with this morning. More "All Good" Fair Trade banana than pancake so these little bites must be healthy.They were yummy with a drizzle of Heilala Vanilla Syrup poured over them after they came out of the oven.

To make them I cooked a batch of pancakes and filled each with a banana . This was chopped into smaller pieces with a sharp knife and then the bites were put into a baking dish and sprinkled with some cinnamon sugar. They were baked for 15 minutes in a moderate oven , enough to warm the bananas, and slightly caramelise the sugar. I watched them carefully towards the end as I wanted the top of the pancakes to become crisp, not burnt.

The cinnamon sugar was made by mixing equal quantities of cinnamon and castor sugar.

The pancake batter I used made large thin pancakes, just right for this recipe

Sift the flour into a bowl
Add the castor sugar
Beat the eggs with the milk.Add a few drops of Heilala vanilla essence
Whisk the dry and wet ingredients together
Leave to stand for 1/2 hour.

Melt a little butter in a frying pan
Ladle in enough batter to coat the base of the pan
When the pancake has browned underneath flip it over.

For the Banana Pancake Bites:

Roll a pancake around each All Good banana
Press down on it slightly and it will magically straighten out,
Cut it into fat slices with a sharp knife.
Arrange in an ovenproof dish,
Sprinkle with cinnamon sugar.
Bake for 15 minutes in a moderate oven.