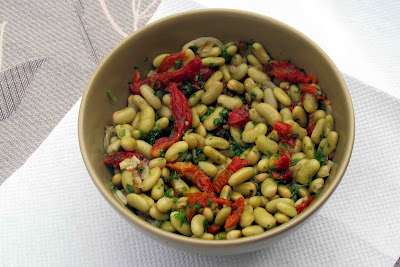 Now what could I make with a can of french green flageolets beans which I'd picked up at our Sunday market. These small delicately flavoured beans are popular in France but I'd never tasted them here. They are in fact young haricot beans.

Their pretty pistachio colour deserved to be shown off so I  decided to revisit that 1950's barbecue favourite " The Four Bean Salad". This was always made with tinned beans as apparently these had more flavour when left to go cold than fresh ones.

There would be a mixture of several beans ( waxed yellow, cut green beans, kidney beans and chickpeas) and they floated in a very sugary and vinegary dressing. Common proportions were 1/2 cup of cider vinegar, 1/2 cup of vegetable oil and 3/4 cup of sugar. I'd throw up my hands in horror now if anyone requested me to add so much sugar!

But as it was just a matter of opening a few cans and chopping an onion it was a very quick and easy salad to make although it did have to be left to marinade in the fridge overnight so the flavours could mingle and the flavour of the chopped onion which was also added would mellow.

Here is my updated one bean salad.

To make my flagelot bean salad I rinsed the beans well and put them in a salad bowl.

I wanted to retain that sweet and sour flavour in this salad so I added half a cup of drained sundried tomatoes ( from a jar made by Cotterill and Rouse) These have been marinated in cider vinegar, sugar and spices.

I fried 1/2 onion and finely sliced garlic in 1 tablespoon of olive oil over a gentle heat until the onion was translucent and added these to the salad.

Then stirred in a handful of chopped parsley and a tablespoon of olive oil. And seasoned to taste with plenty of freshly ground black pepper and salt.

This salad could be served immediately. It was nice served slightly warm, but it would keep well in the fridge if it was made earlier in the day. In this case I'd add the parsley just before serving.

Next time I may add chopped celery for some crunch.
Or some small chunks of fried chorizo sausage.