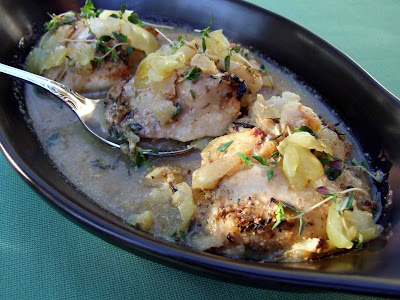 This chicken dish can be thrown together easily before baking.
Verjus means green juice in France. It is a by-product of wine making. When winegrowers thin their grapes (which helps to concentrate the flavour of the remaining grapes) they press these unripe grapes into verjus.

I used 13 Brix Verjus. It is the colour of pale gold and comes from Moana Park Winery in Hawkes Bay, a boutique winery which has already won acclaim for its wines.
It is made from Cabernet Sauvignon grapes which they removed from the vines in mid summer. As the juice is unfermented it is non alcoholic, so you can add it to drinks to your hearts’ content without risking a hangover.
Verjus was new to me but it has been a round for a while! It originated in Roman times and was used liberally by medieval cooks until citrus fruits became more readily available. It has regained popularity in Australia and California. And it is now starting to make its appearance here.
It’s a shame it has taken so long for it to make a come back as not only does it taste good, it is also very versatile. Its has a nice fruity flavour which is not as sharp as vinegar or lemon juice. It can be used in salad dressings, marinades, for deglazing after roasting/frying meat to make a sauce, or made into a sweet syrup for fruity desserts and sorbets.
There is only one small drawback to verjus. Unlike vinegar, verjus will start to spoil as soon as the bottle is opened and it comes into contact with air. However this problem is easily solved as verjus can be frozen.  I poured the remains into an ice cube tray so I could take out small cubes at a time to add to other recipes.
Baked chicken in verjus

Method:
Put chicken thighs in a small baking dish in which they will fit snugly
Pour verjus over the top
Mix the crème fraiche with the mustard
Spread it over the top of the chicken thighs
Scatter the thyme leaves and chopped shallots over
Bake for 20 minutes in a moderate oven
Crush the seedless grapes roughly by hand
Scatter over the chicken
Return to the oven for a further 5-10 minutes until the grapes are warmed through and the chicken is tender
Posted by Shoot and Eat at 10:19