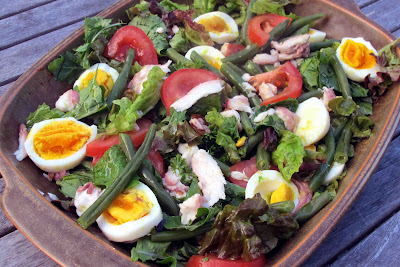 I served this smoked eel salad  on the night of Obama's Victory speech. It's a one meal salad and doesn't mind sitting around for a while so anyone who was feeling hungry was left to help themselves while I kept my eyes glued on the TV. He's a great orator and I didn't want to miss any of it.

I had bought some smoked eel at the market on the weekend. It had been freshly smoked in the early hours of that morning. The fishmonger suggested to slice it thinly and douse it in teriyake sauce, That did sound good.

But it didn't slice easily, bones were in the way .So I skinned it and pulled off the moist flesh .Then added it to a mix of  every day salad ingredients:  lettuce and peppery rocket , sliced tomatoes, boiled green beans  and sliced hard boiled eggs.

I tossed the salad with an olive oil and vinegar dressing to which a little mustard had been added and seasoned it with salt and freshly ground pepper.The smoked eel transformed this rather ordinary salad into a celebratory treat.