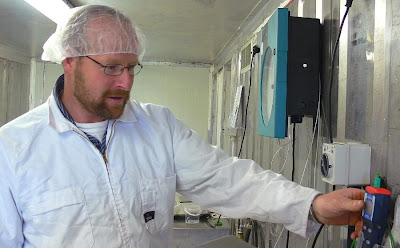 Hangop is a yoghurt cheese, a healthy traditional Dutch dessert . It's easy to make at home.

In Holland traditionally hangop was made with karnemelk (buttermilk) which is the liquid that remains after butter has been churned. These days it’s more commonly made from full cream yoghurt. And sometimes a little whipped cream is added, or sugar or honey according to taste.

My mother used to add brown sugar, and a little cinnamon and sprinkled  them with crumbled biscottes ( light Dutch rusks which are available in some supermarkets here.)
The old way to make hangop was to take a freshly laundered damp tea towel, put some buttermilk in it, tie a knot at the top and hang it over the kitchen tap. It would be left to drain above the sink overnight and by morning the hangop would be ready to serve.
I put a new chux cloth in a sieve, pour in some yoghurt and rest it over a bowl for 5-12 hours so that the whey drains out. The longer you leave it the thicker the hangop gets.

Different yoghurts will give different tastes. After quite a bit of experimenting I liked Clearwater’s yoghurt best. It produces a hangop with the creamiest and most delicious flavour. An added plus is that it is made from certified organic milk and is probiotic. It’s made in rural Canterbury and is sold locally at the local farmer’s market. It is also sold nation-wide.

One of the Clearwater yoghurt makers is a Dutchman called Ad Sintenie. Ad’s grandfather owned a dairy yoghurt business in Holland. Several of their relations had small dairy farms in the area of 10-30 cows and supplied him with milk. Then war came and in the 1930’s all his stainless steel vats and other equipment were taken by the Germans. It was the end of his yoghurt making but the business was later resumed by his father as a delicatessen with many cheeses on offer.

Ad’s childhood dream was to follow in his grandfather’s footsteps. In Holland he trained as a food technologist in the dairy industry. He came to New Zealand 23 years ago as a back packer and fell in love with an English girl called Catherine under an apple tree while working in an orchard. Once back home they started the immigration process as well as a family. They arrived back in New Zealand with 2 rucksacks and a 6 months old baby

It was not until over 3 decades later that he was able to realize his childhood dream and start to make yoghurt. He got together with Bryan and Jackie Clearwater to start a yoghurt making business using milk from their organic dairy farm.
Hangop is great for dessert or brunch. We like it by itself with some runny honey drizzled on top, and poached fruit alongside. But it can also be used as an ingredient in other desserts. Here are some which I created.

A very exotic and decorative version of hangop can be found in Christine McFadden’s Tools for Cooks in which the yoghurt cheese is beaten with rose water and spiced sugar, and is then served sprinkled with pomegranate seeds and chopped pistachio nuts. Here are some more recipes which I created:

Hangop with lemon curd
Serves 1
Mix Together:
2 tablespoons of Hangop
1 tablespoon of lemon honey
1 tablespoon of orange juice
A little finely grated orange rind.
Put a little mound of this on each dessert plate. Decoratively arrange some strawberries or thinly sliced pineapple around it.
The same mixture lightened with some whipped cream makes a great filling for tiny tarts.
Hangop with apricots
Ingredients :
500 grams of apricots (the riper the better)
½ cup of white wine
3 tablespoons of honey (or to taste)
1 cinnamon stick
1 vanilla pod (or use 1 ½ teaspoon of pure vanilla essence)
Hangop
A few crushed amaretti cookies.
Method:
Cut apricots in half and remove the pips.
Arrange in an oven dish
Cut the vanilla pod lengthways and scrape out the little seeds
Mix wine with honey.
Add the vanilla seeds
Pour mixture over apricots
Tuck the cinnamon stick in
Bake in a moderate oven for about 20 minutes. Baste from time to time with the sweetened wine.
Leave to cool.
Put in glasses/small bowls and put a layer of hangop (lightened with some whipped cream if you like) on top.
Sprinkle with some crushed amaretti cookies.
Leave to chill in the fridge before serving.

Nectarine Clafoutis
Ingredients:
500 grams of ripe Nectarines/Peaches
3 tablespoons of sugar.
Batter:
2 large eggs
1/3 cup of sugar
1/2 cup of hangop (drained for 5 hours so it is not too thick)
1/4 cup of flour
1 teaspoon of vanilla
2 tablespoons of melted butter
Method:
Cut the nectarines into slices. Toss them in 3 tablespoons of sugar
Generously grease a 22 cm quiche dish with butter.
Cover the bottom of the quiche dish with the nectarines.
Beat the sugar and eggs together until pale yellow.
Add the vanilla essence
Stir in the hangop gently with a fork
Stir in the melted and cooled butter
Whisk in the sifted flour just until the mixture is smooth.
Bake for 30 minutes or a little less until it is puffed and slightly browned
Serve warm with a dusting of sieved icing sugar on top

Method:
Using a fork gently mix all the ingredients together
Grease some tiny (1/4 cup) ramekins with butter
Fill nearly to the top with mixture
Bake for 15-20 minutes in a moderate oven
They will rise above the rim like little soufflés and flop down again as they start to cool. Serve immediately .