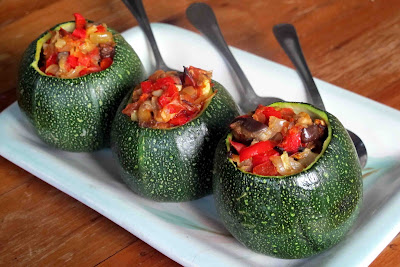 I had a play with these cricket sized courgette balls which I discovered in IE Produce this week. First I scraped out the flesh with a teaspoon and chopped it into small pieces.The insides of the balls were brushed with a little olive oil and they were then baked in a moderate oven for 15 minutes, until the flesh was tender.
Then  I made an oven baked ratatouille. For this I cut the vegetables into smaller pieces than ususal . They included onion,garlic, aubergine, an orange pepper, the courgette flesh and a tomato. I tossed them together in a little olive oil , spread them out in a single layer in a large oven dish and baked them for about 20 minutes. They needed watching carefully towards the end, and an occasional stir to make sure they did not char.Once done, I seasoned them with salt and freshly ground pepper.
The  courgettes hollows were filled with the ratatouille . They are quite sturdy little containers, and although best eaten freshly cooked they didn't mind standing around until dinner time when they were briefly reheated. As you eat the ratatouille you can also scrape away at the inside of the balls and eat the courgette flesh, but the outer skin remained a little tough so we didn't eat this.
These courgette balls would also be good, hollowed and baked for 15 minutes as before, then filled with a warm couscous salad. In this case I'd use the courgette flesh in another recipe like a veggie soup rather than waste it.