Two Black Dogs and a Bottle of Good Olive Oil 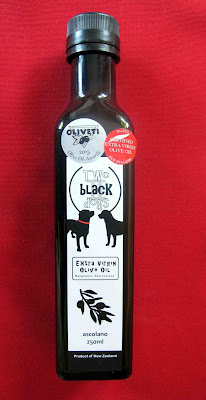 This week  I was given a bottle of Two Black Dogs extra virgin olive oil to try. I love the back story. Graham and Nicky live in Mangawhai in Northland, New Zealand. Having bought a property on which there was a grove of olive trees  they decided to jump in gumboots and all to produce this lovely grassy green extra virgin olive oil.

Their first olives were harvested in May 2015 and their Ascolano olives were used to produce a small run of extra virgin olive oil which has been certified by Olives New Zealand as Extra Virgin Olive oil.

Their two black labs have the best kind of dog's life running amongst the trees, sniffing around , sampling the odd olive and absorbing the sun after a swim.  The olive oil is named after them and they feature on the label.

I've really enjoyed creating some recipes with this oil: 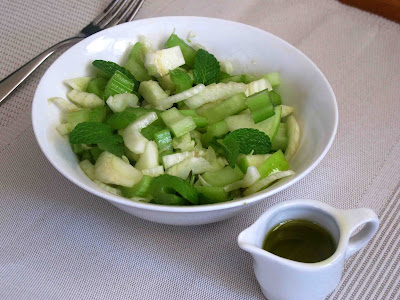 I first tasted a salad made with just three ingredients: celery, fennel and apples at my sister in law Janet's house in Sydney recently and it has become a firm favourite at our home. To make it I sliced a couple of celery stalks, two fennel bulbs and two Granny Smith apples ( unpeeled) and put these into a salad bowl. I dressed the salad with 3 tablespoons of Two Black Dogs extra virgin olive oil , the juice of 1/2 lemon (or you could use 1 lime) and some freshly ground rock salt. My special touch was to leave the dressing to soak in for an hour or so. Then I tucked in a few freshly picked mint leaves and provided a tiny jug of Two Black Dogs extra virgin olive oil alongside to dribble over it as this really boosted the flavour.

So what should come first when you have a slice of ciabatta, an avocado and some Two Black Dogs extra virgin olive .It's a debatable point. My son Nick uses olive oil like butter (he likes the way it soaks in and flavours the bread) and then adds the topping. Preferring to avoid soggy bread I do it the other way round. I mush up some avocado, spread it liberally on the bread and add a generous drizzle of Two Black Dogs extra virgin olive oil which pools and glistens on top. Then I grind some rock salt on top and a sprinkle of Mexican spices or dukkah. Yum!The perfect breakfast. 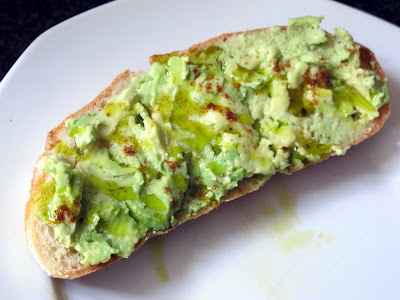 Just  lately I've been making my own pita bread in the fry pan using a great recipe from the Kitchn . They don't puff up quite as much as those made in the oven but you do get nice crunchy toasted spots on the serface when you cook them this way. Here's the link:

You can of course buy a packet of pita bread for this recipe but home made is nicer.

For the topping I picked a bunch of herbs from the garden : rosemary, thyme and oreganum, chopped them finely and smashed a peeled clove of garlic with some rock salt. I stirred this mixture into three tablespoons of Two Black Dogs extra virgin olive oil. Then brushed it liberally onto two pita breads. They were baked in the oven) at 200 degrees C for about 10-15 minutes until the bread had crisped up. We had this for lunch with some kumara  flavoured hummous, delicious! 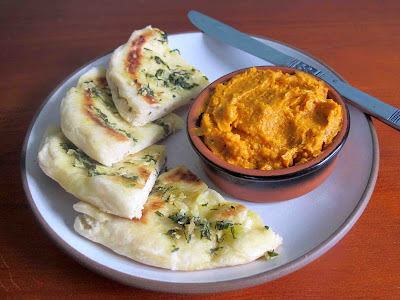 At the Takapuna market on Sunday I found some canned hearts of palm. I'd never used them before but thought I'd try them in a salad. And the verdict ? Very tasty and would make again.

I simply drained the liquid from a 400 gm can of hearts of palm. These hearts of palm look like little fat sticks but are quite tender).I sliced them quite thickly and put them into a salad bowl. Then added two chopped tomatoes, the finely sliced whites of 2 spring onions  and plenty of flat leaved parsley. The dressing was made with 2-3 tablespoons of Two Black Dogs extra virgin olive oil and the juice of !/2 lemon.

The following evening we had this salad again. This time I added a chopped up avocado and arranged the salad on a bed of mesclun leaves. Some feta crumbled over the top completed the dish. 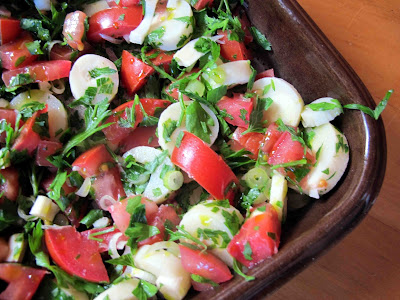 And here are some a pictures of the the handsome and bouncy black Labrador George, and his bosom pal little Millie! These two are the much loved pets of my daughter Rachel her partner and our three granddaughters. No olive trees for them but a nearby beach to cavort on ! 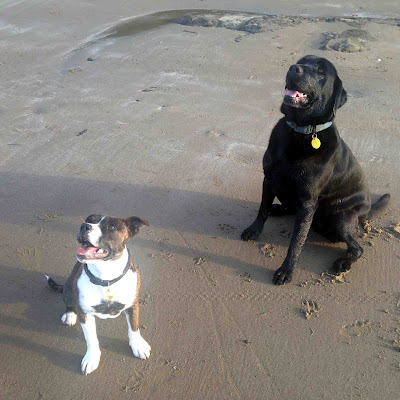 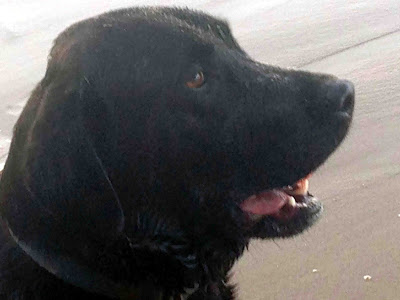 Quinoa Tabouleh with a smoked paprika and mustard dressing. 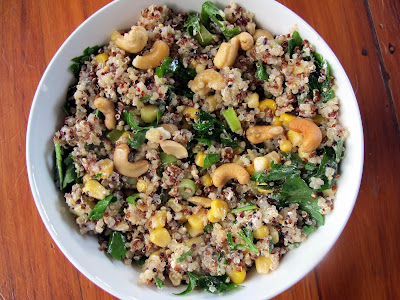 This is the tastiest quinoa salad I have made this year, inspired by a recipe in  Yvette Van Boven's 'Home Made ' recipe book. It made good use of some of our abundant crop of parsley and the last of our rocket.

What intrigued me about this recipe was the combination of smoked paprika and mustard in the dressing  giving a slightly smoky and pungent flavour. Thanks Nick for being the taste tester.

Dressing:
Whisk together
1 tbsp of dijon mustard
1 garlic clove ( peeled and smashed)
1 teaspoon of smoked paprika
1/2 cup of olive oil
the juice of 1 lemon (or more to taste)

Method: Cook the quinoa first
Sort through the Quinoa as sometimes small  stones are present and it pays to remove these little toothbreakers. Then rinse under running water, In  pot , put a cup of  Quinoa or Super Grain Mix with 2 cups of watr. Cover and bring to the boil. Reduce heat and simmer until all the liquid is absorbed, about 15 minutes.
Leave to cool until lukewarm.Add the other ingrdeints and stir in the dressing. Season with salt and freshly ground black pepper to taste.