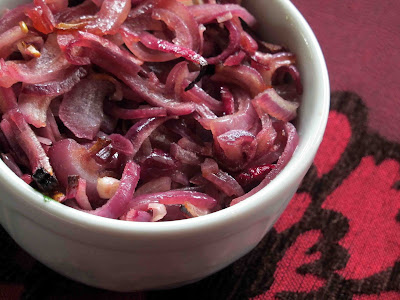 These roasted figgy red onions tasted sweet and caramelised. Their  flavour was milder and sweeter than roasted balsamic onions. The sesame oil added a faintly oriental flavour . I roasted them alongside some kumara wedges, then tossed them together to make a warm salad. But they are good on their own as well, alongside a quiche, or tucked into a hamburger
Ingredients:
3 red onions (peeled and sliced)
2 tablespoons of Te Mata Just Fig Syrup
A few drops of sesame oil
1 tablespoon of olive oil
Salt and freshly ground pepper to taste
Method:
Mix the Te Mata Fig Sauce, sesame oil and olive oil together.
Toss the sliced onions in this mixture.
Bake in one layer in an oven dish at 180 degrees C until the onions are soft and have caramelised.
This took 40 minutes in my oven which seemed rather a long time. Oven temperatures vary so start checking after 20 minutes from time to time as they roast.
Season to taste.