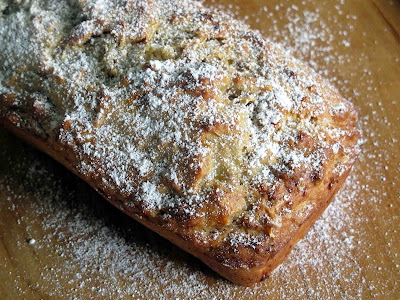 I'd read that walnut oil will keep baking moist and give it a mild nutty flavour so I created this easy banana and walnut oil loaf to see if it would work for me.

Normally I'd add walnuts to a banana bread but that could have overwhelmed the walnut oil flavour which I wanted to taste so I left them out.

I made the loaf in the morning. It improved on standing. I think it would have been a good keeper but it was all gone by the end of the day.

The result was met with mixed feelings. My partner said it lacked flavour and was too stodgy. My friend Joan liked it buttered with avocado olivani. She said she could detect a slightly nutty flavour

I felt that the walnut oil should have been the dominant flavour, but it didn't really stand out clearly against the vanilla and rum essence.

Still this loaf was good with a cup of tea . Once it had been left to cool for a few hours it sliced beautifully .

Would I use it again in baking? It is healthier than butter as it is high in antioxidants and comparatively low in saturated fats. And it does keep baking moist so that's also in its favour.

But I think the nutty flavour is rather mild and as it is much more expensive then butter or other vegetable oils like sunflower oil I'd only use it very occasionally in baking. I have heard it is good in a carrot or apple cake.

Walnut oil  has a low smoking point so if you use it in loaves, muffins or cakes bake them at a moderate temperature.


Banana Loaf
Ingredients:
Method
Mash the bananas with a fork or wooden spoon.
Mix in the oil, brown sugar and essences
Beat the egg with a fork and stir in
Sift the two flours and add.
Pour the  mixture into a greased loaf pan
Bake at 175 degrees C for about 50 minutes .
Cool on a rack before slicing.
Click on the comments you'd like to print with your recipe. Grayed out comments will not print.

(Ads will not print.)
Top