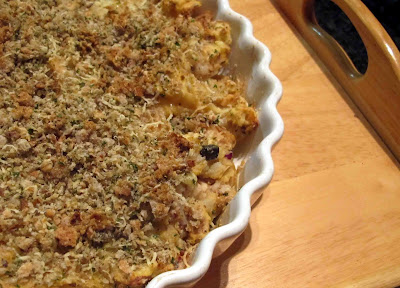 I'd assembled all the ingredients for salmon fish cakes when it occurred to me that there must be an easier way to make dinner than laboriously shaping and crumbing each one individually. What I came up with was this easy and tasty potato and salmon crumble pie.

I can't give the exact measurements as it was an impromptu decision. I simply started with a few cups of mashed potatoes. Then I added a couple of cans of drained salmon, a teaspoon of mustard , some capers and a finely chopped red onion and salt to taste.

For the topping I whizzed 3 slices of stale walnut bread until they were reduced to crumbs, added some freshly grated parmesan cheese and chopped parsley and moistened these with some cold pressed walnut oil (I used Uncle Joe's).This topping was generously sprinkled over the fish and potato filling.

The pie was baked in a moderate oven until the crumble was golden and the pie was piping hot. I was careful to keep the temperature at 175 degrees C as walnut oil burns easily and can then also impart a bitter flavour.

You could easily substitute olive or rice bran oil and add some toasted walnuts to the crumble.

My crumble pie easily served 6with some of my light waldorf salad ( which I posted earlier today) alongside.