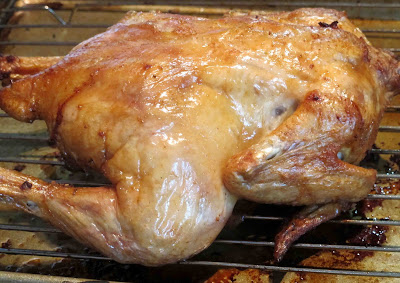 Mecca Ibrahim, the head of Social Media at Great British chefs gives her recipe for the perfect roast chicken and explains it step by step at

It made me think. Was there room for improvement on our family recipe?

I agree with her that Free range is best, and corn fed helps to achieve a golden brown colour.

She tells us to truss , but personally I think this is unnecessary. My chickens roast perfectly well without being tied up.

To stuff or not to stuff? I'm on the side of  Jamie Oliver and Delia Smith and usually stuff my chicken using my mother in law's recipe. But for  a midweek dinner I sometimes  just quarter a lemon, add some fresh thyme if I have it, and stuff the chicken with that.

Like Mecca I do rub the chicken very lightly with olive oil before roasting it.

I think her idea of putting the chicken to roast on a rack  is  good , as not only does it allow the air to circulate but the fat can run off the chicken into the roasting dish below, which will make the chicken more slimming.

Does a roast chicken really need gravy? Here I flaunt tradition and usually serve my roasted chicken without. If it's organic and well cooked I think it is flavoursome enough by itself.

Letting a chicken take a ten minute rest after roasting. We should do it. But a perfectly roasted chicken smells so good when it first comes out of the oven that my partner can never wait to attack it with a carving knife before it starts to cool down.

My mother in law's recipe for stuffing a chicken is light and not too buttery.It's a recipe of hers which I treasure. She also draped her  chicken with strips of bacon before roasting which made it especially tasty. And yes, a chicken without gravy would have been unthinkable to her.