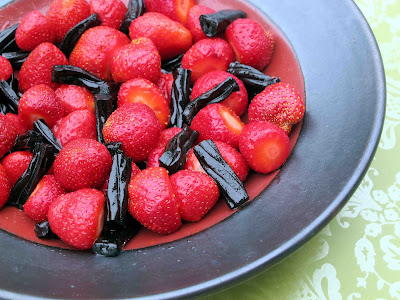 Strawberries and liquorice may sound like an unusual combination but they make an ambrosial dessert. Short Black Knight liquorice twists are best for this. The marinade makes them even shinier so they glow mysteriously. This is the kind of fruit salad I think Harry Potter would have loved. But nobody ever thought to create it for him. Well he can have it now!

The recipe came from my sister-in-law Angela.She wrote:
" My friend in the 80s, who concocted this at the last minute at a barbecue at her home was called Katherine-Mary. Double-barrelled names can suggest people are a bit pretentious or nerdy, but this young woman was enormously fun, friendly and an eccentric fashion icon, as well as being a parent, with her oncologist husband, to five children!


The marinade was just the usual icing sugar to coat and make the strawberries shiny (not other sugar) and however much of a slosh of brandy (in the original) is suitable (esp if children are are going to partake!) I like the taste of brandy, but I think whisky brings out the flavour of the strawberries more and is less obvious. You don’t need to marinate them for long e.g. just before starting lunch, dinner or whatever, but of course the longer you leave them, the more intense the flavour will be, but the strawberries will be soggier. I prefer the strawberries to still be pretty firm. Put the short chunks of licorice in as soon as you’ve put the sugar on the strawberries, so that they too become nice and shiny and covered in flavour during the whole process too.  "

This recipe is flexible. Adjust it to your own taste. And it can easily be multiplied to feed a crowd.This is what I used.