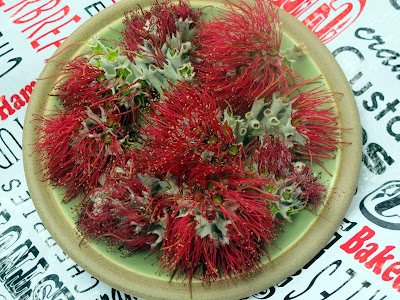 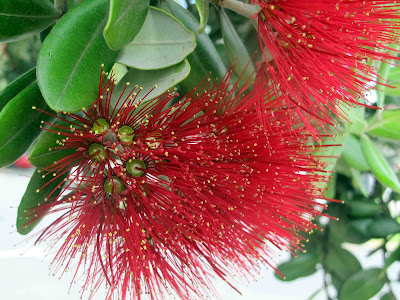 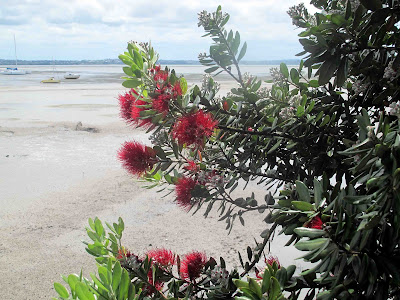 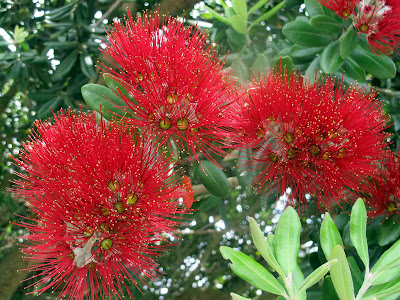 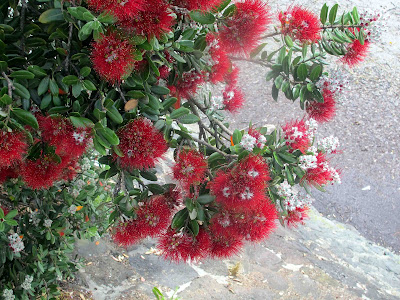 
At the front of our house the old pohutakawa tree is in flower.The flowers are so high up they are unreachable but I gathered some of the fallen flowerheads and put them into a bowl.

As I drove over the bridge this afternoon through Ponsonby and along the Westmere waterfront the landscape was dotted with dozens of flowering pohutakawa trees heralding the fact that Christmas is just around the corner.I couldn't resist stopping here and there to take a few pics.

New Zealand History net traces the story of  the pohutakwa and when it first became known as our Christmas tree. They have also included some Maori Legends and described how one particular anicent  pohutakawa tree marks 'The Place of Leaping"

Here are some exerpts:

"The pohutukawa tree (Metrosideros excelsa) with its crimson flower has become an established part of the New Zealand Christmas tradition. This iconic Kiwi Christmas tree, which often features on greeting cards and in poems and songs, has become an important symbol for New Zealanders at home and abroad."

"In 1833 the missionary Henry Williams described holding service under a ‘wide spreading pohutukawa’. The first recorded reference to the pohutukawa as a Christmas tree came in 1867 when the Austrian geologist Ferdinand von Hochstetter noted that settlers referred to it as such. The pohutukawa, he observed, ‘about Christmas … are full of charming … blossoms’; ‘the settler decorates his church and dwellings with its lovely branches’. Other 19th-century references described the pohutukawa tree as the ‘Settlers Christmas tree’ and ‘Antipodean holly’."


"A gnarled, twisted pohutukawa on the windswept cliff top at Cape Reinga, the northern tip of New Zealand, has become of great significance to many New Zealanders. For Maori this small, venerated pohutukawa is known as ‘the place of leaping’. It is from here that the spirits of the dead begin their journey to their traditional homeland of Hawaiiki. From this point the spirits leap off the headland and climb down the roots of the 800-year-old tree, descending into the underworld on their return journey."
To read it in full go to:

http://www.nzhistory.net.nz/media/photo/pohutukawa-flowers
Posted by Shoot and Eat at 19:28