Edamame and Green Bean Salad with an Asian dressing 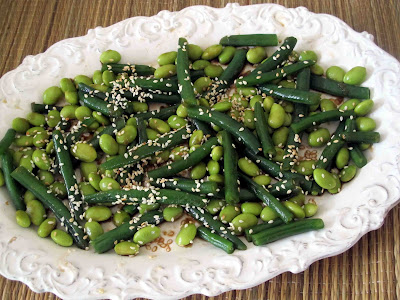 Edamame is the Japanese name for soya beans . I found a packet lurking at the back of the freezer as I was cleaning it out today .
When my two vegetarian children are at home we snack on edamama beans but they are in India for the summer.There was no way I could eat a whole packet in one sitting by myself so I created this salad. I thought it was light, healthy and tasty. And even the usually non edamame eater said he would like to try some when he spotted it.His verdict: Good in small quantities ( actually he happily demolished half of it!)
.
﻿
Ingredients:

Follow the instructions on the packet for heating  the edamama beans  ( I Used the Mama San brand which have been precooked and only need to be boiled for 2 1/2 minutes or microwaved till warm, When they have cooled a little pop the seeds out of their pods.
Bring water to the boil for the green beans and boil these for 3 minutes. Drain, immerse in cold water to cool, then drain again
Toss the edamama beans and the green beans in the dressing
Arrange on a platter
Sprinkle with roasted sesame seeds. 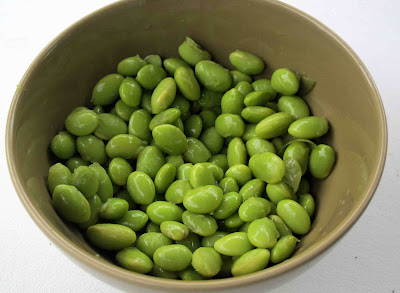 Instead of the hot chilli sauce next time I'd like to try using one of my favourite  Japanese spices ( which is available in supermarkets and is called Nanami-Togarashi. It is similar to
Shichimi-Togarashi which includes powdered/flaked red chili pepper, black pepper, sesame seeds, dried mandarin orange peel, green nori seaweed flakes, prickly ash pods, hemp seeds and poppy seeds. I usually have a small bottle of it in my pantry but had run out.