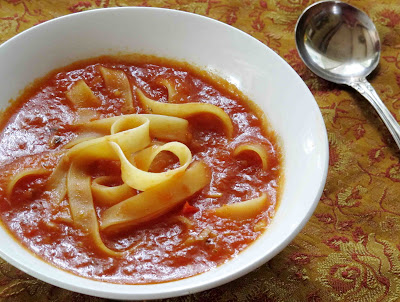 This soup is light but nourishing and just spicy enough.It is a variation on a Gujarati Noodles and Tomato dish in Madhur Jaffrey's Flavours of India. Her recipe is a saucy dish made with fresh tomatoes.But I like the more intense tomato flavour to be found in a can of tomatoes in tomato juice.

In Gujerat it would be made with a bag of crispy noodles. She suggests that while the noodles can be bought from an Indian grocery store ( look for medium-thick or thin sev) home  made noodles would be best. I had neither but the little nests of dried Italian noodles I used both looked and tasted good.

Peanut oil was not in my pantry either but I prefer to use olive oil as it always goes well with tomatoes. I used less of it too.

She used cayenne pepper but I like the more aromatic flavour of freshly ground black peppers and don't mind the little black spots they create in a soup. I have never used asafetida . Only 1/2 teaspoon was used in the original recipe so it probably didn't make too much of a difference. I hope not!

And it should have been garnished with lots of fresh coriander but I had run out . This would have enhanced both the flavour and the appearance it was still really good without.I'll add it next time.

Heart the oil in a frypan until medium hot.
Add the cumin seeds and let them sizzle for 10 seconds
Add the garlic, chilli and ginger and stirfry until the garlic begins to turn a golden brown
Add the ground turmeric and stir once.
Empty the contents of the can of tomatoes into the pan.
Add an equal quantity of vegetable or chicken stock.
Bring to the boil and simmer for 2-3 minutes over medium low heat, stirring frequently.
Drop in the two little noodle nests and continue to boil simmer for about 7 minutes until the noodles are done.
Serve in bowls and garnish with freshly chopped coriander.
Posted by Shoot and Eat at 16:28