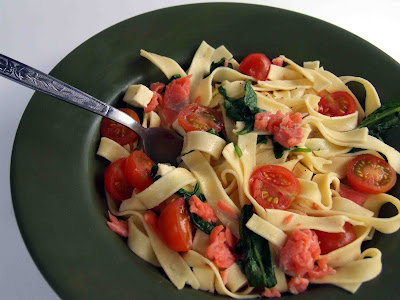 I made this pasta sauce with a bottle of Tuna Gold which I bought at the La Cigale Market in Parnell. But it can also easily be made with canned tuna . Being mindful of the environment I would choose a brand which has been sustainably caught such as Pam's.

Tuna gold is both caught and processed locally. Dale Coker and his team catch the tuna from his vessel Pegasus II which is based in Whangaroa Harbour. They use surface long lines and jigs which are both sea bird and dolphin friendly.Once caught the fish is often landed at Opua, and transported directly to the factory in Harura Falls where it is processed by hand into Tuna Gold. It is cut into large cubes, packed into jars, a sauce is added and it is then cooked in a pressure cooker.

To make Tuna Gold large chunks of wild albacore tuna are simply packed into glass jars and cooked once. This allows them to retain more of the highly beneficial Omega-3 fatty acids which are reputed to be a miracle food of the 21st century. They are believed to help prevent heart disease, relieve joint pains, improve brain function and stave off depression.

Bake the first 3 ingredients about 20 minutes in a moderate oven
Remove garlic and squeeze it.
Puree everything with tomato puree in the food processor until smooth (or leave it a little chunky if wished.)
Gently stir in 1 bottle of Tuna Gold.
In the meantime boil fettucine until al dente.
Pour the sauce over the pasta and toss together.
Grate parmesan over the top and scatter with ripped basil leaves.