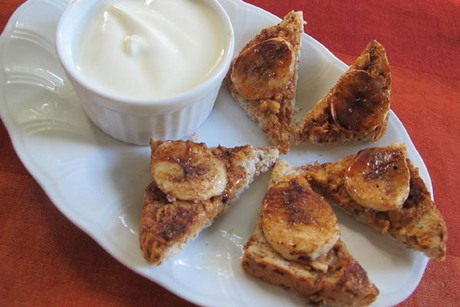 Peanut butter which has a lot going for it healthwise. It has lots of protein (about 30 percent) and it’s a plant food so there’s no cholesterol which is good for the heart. It also contains folic acid which can help to lower the risk of heart disease.
It’s true that it’s not low on calories. A couple of tablespoons add up to 187 of them. But nutritionists now say that if you limit your daily intake to two tablespoons of peanut butter a day this won’t exceed the guideline daily amounts of fat and calories for adults. Combine it with plenty of fruit, vegetables and salads and you’re onto a healthy diet.
Perhaps the best thing about peanut butter is that it sticks to your ribs like porridge so you are not tempted to keep on snacking for the next few hours. And let’s face it, it’s the stuff you eat between meals, rather than meals themselves which are the worst offenders.
However be warned. Quite a few peanut butters are not 100 percent pure and have transfats, hydrogenated oils, sugar or preservatives added that are not good for your health. So it pays to read the label to find out what’s in the jar before you buy.
My favourite right now is Nelson-made Pic’s peanut butter which is 100 percent natural, made from Aussie peanuts, then batch roasted and freshly ground in Nelson . The judges voted it as one of the twelve best Artisan Food Products in the 2010 Cuisine Artisan Awards. It tastes seriously good, and an added surprise is the not so serious poem you will find if you peel off the label.
Here are a couple of kid friendly peanut butter recipes
(A cautionary note: the fact that these recipes contain peanut butter may not always be obvious. So do make sure that anyone you serve them to is not allergic to peanuts.)
Peanut butter toasties: Spread slices of toast with a mixture of cinnamon, cocoa and castor sugar. Grill briefly to caramelize the sugar. Cut into triangles.
( Optional) Serve with a bowl of thick Greek Yoghurt to dip them in.
Sesame Peanut noodles: This tastes good warm but can also be served cold and will keep in the fridge for several days. Good to have for lunch.
Sesame and Peanut Butter Noodles
Ingredients:
400 grams of noodles/pasta
2 tablespoons of peanut butter
2 tablespoons of soya sauce
1 tablespoon of sesame oil
1 teaspoon of honey
1 tablespoon of rice vinegar/lemon juice
1-2 tablespoons of sweet chili sauce (according to taste)
2 minced garlic cloves
1/2 red onion finely chopped
1 teaspoon of grated fresh ginger.
2 medium sized carrots julienned into fine sticks
1-2 red peppers cut into strips.
A small handful of chopped coriander
Method:
Put all the peanut butter, soya sauce, sesame oil, honey, rice vinegar and sweet chili sauce into a bowl and microwave for 30 seconds/until honey dissolves.
While still warm stir the sauce, julienned carrots and red peppers into the freshly boiled noodles or pasta.
Leave to cool down.
When ready to serve sprinkle with plenty of chopped coriander.