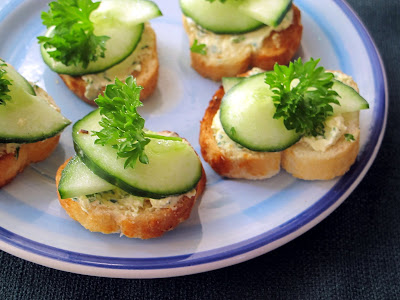 Madhur Jaffrey's Spicy Cucumber Sandwiches ( in Food for Family and Friends) was the inspiration for this recipe.She cleverly spiced up that iconic British afternoon tea item first enjoyed by the upper classes in Victorian times.


I liked her flavour combination  but we snack on bruschetta rather than sandwiches . Would her filling work as a topping for rounds of toasted French Bread?

Madhur had said one green chilly or more. I added a couple which was a mistake as I  burnt my mouth at the first bite. I cut it back to 1/4 green chilli.Then the butter was a little too bland for my taste so I substituted it with a more tangy cream cheese.

She used small pickling cucumbers. To make them less watery (so less likely to seep into the bread and turn it into a damp sponge) she salted them , put them aside for an hour then drained them and patted them dry. As we would eat them immediately I wasn't worried about sogginess, so I didn't bother to do this. If I had wanted to serve them later this would have been a good idea.

Pickling cucmbers were not available but telegraph cucumbers are plentiful and cheap. The slices, however, were too big for my French stick so necessity being the mother of invention I cut into each slice to the middle and then twisted them over.

Victorian English Upper Class ladies would no doubt have turned up their noses at chunky rounds of toasted French bread instead of wafer thin sandwiches, and they would probably been horrified at Madhur's spiced up version as well. But tastes change and I'd happily serve these bruschetta with a chardonnay or a cup of chai under the sun umbrella out on the deck on one of the hot summery days we are  enjoying right now.

Mix the mustard, lemon juice, coriander and chilli into the cream cheese and season to taste. Spread this on the rounds of toasted French Bread.
Add a slice of cucumber.
Decorate with a sprig of coriander or parsley.


I created this recipe for the I Heart Cooking Club Challenge. This week we were challenged to create an appetiser or finger food based on one of Madhur Jaffrey's recipes. Take a look at the other entries at