Marinated Mushrooms with Basil and Ginger 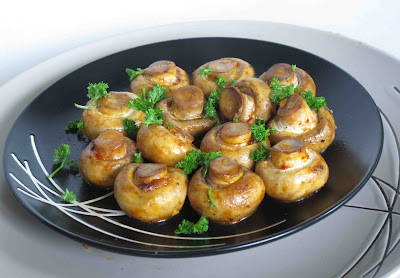 I made a bowl of aromatic mushrooms for lunch today. You could easily serve them by themselves with toothpics or scoop them with a spoon straight out of the bowl . But we had a fresh baguette. I decided to fill it.

Fot two of us I cut 2/3rds of the baguette in half horizontally. This may sound rather greedy but the other one of us has rather a large appetite.

I spread the bread with some mascarpone ( cream cheese would have been fine too) added a layer of rocket fresh out of the garden , then the mushrooms and on the very top a layer of sliced tomatoes. This is the kind of soul food that you would only want to eat in familiar company as some of the filling could easily escape as you munch it. We  really enjoyed it.

This mushroom recipe was adapted from Paul Gaylor's book " Pure Vegetarian which I has been our since 2008 but I have only just come across it. BBC Food magazine called it "Inspiring,,,well written and easy to follow." and it is.

He used oyster mushrooms but the 400 grams needed for this recipe would make it a very expensive dish. I settled for 200 grams of button mushrooms but I didn't halve the marinade. Intuitively I felt that these mushrooms would relish the full amount in the original recipe, and they did.

And yes, one green chilli  ( not the two in the original recipe) was enough. My partner baulks at anything too spicy.And  I used sweet basil.

It was a little more time consuming than I had thought to smash the ginger, garlic and green chilli with my pestle and mortar. They never quite turned into the smooth paste called for in the original recipe, as before long I had tired of the pounding, but actually I think stopping when there was still a little texture was good.

In a mortar place the  chopped ginger, garlic and chilli (with a little salt If you wish) and crush to a  paste with a pestle and mortar
Heat the oil in a frypan/wok. Add the paste and let it infuse and flavour the oil for about 20-30 seconds.
Throw the mushrooms in cook them for about 3-4 minutes stirring as you go. Then add the soya sauce and sugar. Fry for a further minute and then add the lemon juice and basil. Toss just to combine and then take the pan off the stove and spoon the mixture into a bowl . Leave it to cool before serving the mushrooms at room temperature. Paul advises not to chill as the delicate marinating juices would dilute the flavour.