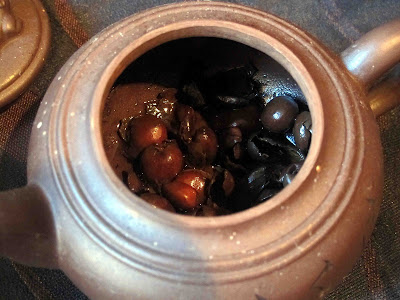 ﻿
﻿
I've just discovered coffee berries .They makes a refreshing drink which tastes naturally sweet and has a fruity flavour  rather like rosehips or cherries. This tea is reputedly very hich in antioxidants and contains some caffeine.

I brewed it in my little chinese red clay teapot which brought out the flavour. It's ususally made in a plunger and if it is brewed for about 4 minutes will make a dark red tea.

I like it just as it is but you can add some spices like a cinnamon stick, cardamom and/or ginger, much like a cup of chai but without the milk and sugar. On a hot summer's day it can be served icy cold as well

Coffee beans grow inside the coffee berry, but the outside husk has traditionally been discarded or used to make compost. The berries are used to make a drink called Cascara in some coffee drinking countries, or Sultana as it is called in Bolivia.

I found my packet of coffee berries at
http://arkcoffee.co.nz/ in Takapuna.