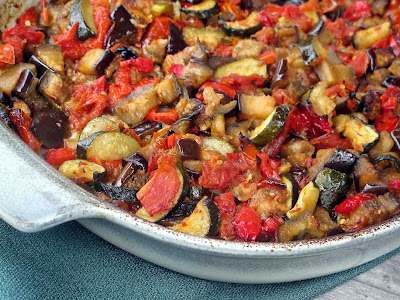 At the Sunday market this morning I bought semi dried tomatoes preseerved in canola oil and decided to bake them with aubergines, red peppers and courgettes in a honey and orange marinade.It was delicious.

This was influenced by a Paul Gayler recipe in "Pure Vegetarian." In this recipe he used lemon instead of orange. I also substituted his red onion (cut into wedges) with the drained semi sundried tomatoes.

What I liked about his recipe is that after baking the vegetables for a little while he pours over vegetable stock and continues roasting.

The roasting intensifies the flavour and the braising makes the vegetables softer and more like a traditional ratatouille.

Gayler insists that a good quality honey will make a difference in this dish.  I had some rather special honey from Blueberry Farm in the Bay of Plenty so I sacrificed 4 tablespoons of it to make this dish. But I'm sure ordinary clover honey would be good as well.

This made a large amount which served 6 people easily at a barbecue with sausages, baked potatoes and a green salad to complete the meal.

Preheat the oven to 200C
Use a fine grater to zest the orange.
Mix the orange juice and honey together. If necessary put them in the microwave for a few seconds to dissolve the honey.
Toss the vegetables in the orange and honey marinade.
Sprinkle the orange zest on top.
Drizzle the olive oil over and toss well together again
Roast the vegetables in a large roasting dish for 15 minutes or so until lightly caramelised
Give them a stir
Pour over the hot vegetable stock
Keep baking ( stirring from time to time) until the vegetabels have cooked and the liquid has become thickened and caramelised.
This took another 35 minutes in my oven. In some ovens the time could be alittle less or more, but do keep a careful eye on them towards the end of the cooking time to make sure they don't burn.

This can be served hot or at room temperature.