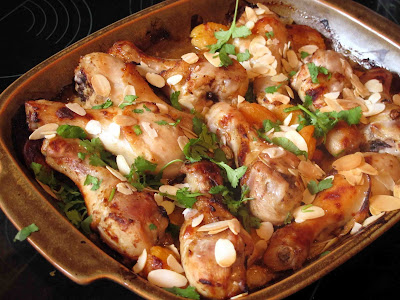 She called it " An elegant dish that could be served to the family or at a grand party" with rice as the ideal accompaniment.

Hers was a recipe in which some spices, chicken, almonds and sultanas were fried. They were then combined with yoghurt into which black pepper, ground cumin, ground coriander, chilli powder and green coriander had been stirred. Then all were simmered together gently for 20 mintues. At this point the heat was turned up and the sauce was reduced until it was thick.

In my simplified version I  marinated some chicken legs in a spicy yoghurt in the morning . The yoghurt I used was Clearwater's Cream Top Apple and Cinnamon. This is a beautiful natural yoghurt made from organic milk. It is only very slightly sweetened and there is a hint of apple and cinnamon. This added a subtle fruity flavour and a very little sweetness, Instead of 2 1/2 tablespoons of raisins I added 200 grams of dried apricots

In the late afternoon I  baked the chicken. Apart from an occasional stir, it could be left alone to bake and once garnished with sliced almonds and green coriander it looked sumptious.Even my usually non Indian food-eating partner enjoyed this dish and would happily eat it again.

I adapted this recipe as my challenge in the I Hearts Cookery Club. The Madhur Jafffrey theme this week was Dried Fruits . Take a look to see how other cooks have interpreted it. at
http://iheartcookingclubs.blogspot.co.nz/

Method:
When ready to prepare dinner heat the oven to 190C