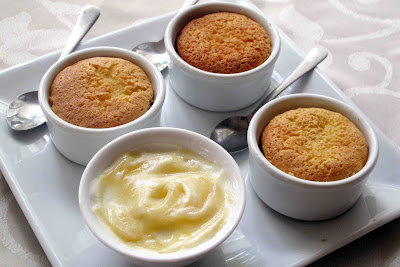 Nine year old Becky my granddaughter loves food and cooking with me. We had already demolished half a jar of Barker's Lime Curd on our toast for breakfast  that week but luckily there was still half a jar left.This looked like a promising start for a citrussy dessert.

We began the sauce from scratch and she kept adjusting it until she though it tasted just right, with the lime curd coming through nicely but not overpowering the orange juice. We added a little honey to sweeten it. "Perfect," she said.

She dribbled some of it over icecream and licked the bowl clean. But I thought it was too runny so suggested another way we could use it could be on little little sponge cakes. We could pour the sauce over them and let it soak in.

We baked them in muffin tins, let the cakes cool for a few minutes, then gently eased them out and rested them upside down in small ramekins. The holes were poked in each little cake with a sate stick and a little sauce was poured over. Then we turned them around and repeated the process. This was a no mess method and the moistened cakes were left in the ramekins for serving .

I  swirled a generous amount of lemon curd through some whipped cream to have with them. When raspberries come into season they'd be nice alongside as well,.

Heat the honey for a few seconds in a microwave bowl to melt.
Stir into Barker's Lime Curd and orange juice.

Beat 3 eggs and 3/4 cup of sugar until thick and creamy
Fold in 3/4 cup of flour and 1 teaspoon of baking powder sifted together.
Finally mix in 3 tablespoons of boiling water
Pour mixture into muffin tins .
Bake for about 15 minutes in a moderately hot oven.( 190 degrees C)

Leave them to cool for a few minutes before removing them from the tins. Poke holes in the bottom of each cupcake with a sate stick, Dribble a couple of teaspoon  of the sauce over each one. Turn  them over and repeat the process.

Leave them to rest for a while so the sauce can be absorbed by the cupcakes.
Swirl a generous amount of Barker's Lime Curd through some cream and serve alongside.