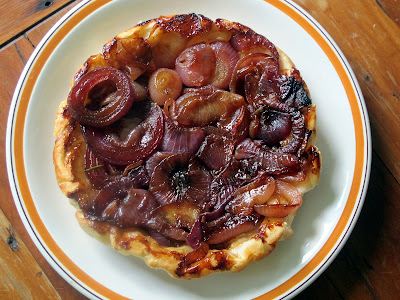 Nigel Slater bakes it Delia Smith bakes it and so did my niece Julia in Brussels. When she posted a luscious looking pic of it on Facebook ( see below) I couldn't resist joining the club.She used Delia's recipe which like Nigel's can be found online if you google.
As luck would have it at the Takapuna Sunday market my favourite veggie sellers from Pukekohe had the first of the new season's red onions.So with a bag of these fresh out of the earth I rushed home and turned to my 1996 volume no.2 of One Year At Books for Cooks  ( Pryor Publications)
Here I found what I think is the perfect recipe for a red onion tarte tatin ( though Julia and Delia may wish to contest this) The decription says it all:
"From Lindsey Bareham's Onions Without Tears" this savory Tarte Tatin of red onions glistening with deep purple caramel, set in burnished pastry, is every bit as tempting as its apple ancestor."
I had to make a few small adjustments. I only had 600 grams of red onions ( 1 1/2 pounds/720 grams were used in the original recipe) My balsamic vinegar is on the inexpensive side so to add sufficient depth of flavour I added two tablespoons instead of one and I added it at the same time as the stock so it would have time to permeate the onions) It was to be vegetarian recipe so vegetable rather than chicken stock it was. I left out the anchovies and olives ( new season's red onions can stand alone)

The cloves of garlic were from our first home grown crop. But as there is only one tiny thyme plant growing I used finely chopped rosemary instead.
And no, I didn't rise to the culinary heights of making my own pastry but I bought a packet of puff  from Countdown. As there were less onions I managed to squeeze them into a 20 inch ceramic dish which meant that I didn't have to fiddle around with piecing bits of pastry together, one square ( rounded off at the corners) was just sufficient.
I'd have to say Julia's red onion tarte tatin looks more gorgeous than mine with those artfully arranged sprigs of thyme.She confessed to polishing hers off  at one sitting. I made it last for two ( one for lunch and one for an early dinner at 3 pm.
Ingredients:
600 grams of medium sized red onions peeled and horizontally cut into thirds
60 grams of butter
2 tablespoons of sugar
salt and pepper
1 cup of vegetables stock
2 tablespoons of balsamic vinegar
1 tablespoon of finely chopped rosemary
1 square of puff pastry ( rounded off at the corners to a circle slightly larger than a 20 cm dish)
Method:
Heat the oven to 190C
Butter a 20 cm round dish
Melt the butter in a large frying pan and when it sizzles arrange the onions on top in one layer.
Cook for about 5 minutes over moderate heat and then sprinkle them with the sugar, the balsamic vinegar and the stock and let them simmer for about 30 minutes until the onions are soft, and have reached a sticky toffyness. Sprinkle with the finely chopped rosemary.
Arrange the onions in the buttered dish.
Lay the pastry  over it and tuck it in like a baby's blanket.Prick with a fork so steam can escape. This prevents soggy pastry.
Bake for 30-50 minutes until the pastry is golden brown. Leave it to cool for 5 minutes before turning it out. Now comes the tricky bit.
Run your knife around the edge of the tart . Put a plate over it and turn it upside down so it plops onto the plate ( hopefully in one piece, thank goodness mine did) 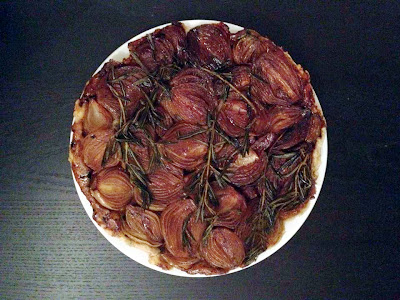 Julia's red onion  tarte tatin which was my source of inspiration.