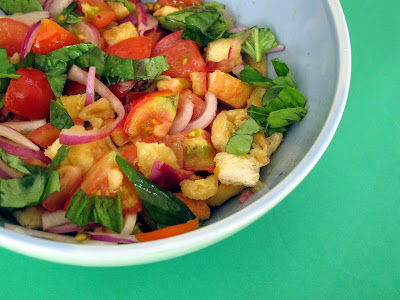 I was keen to use some of our homegrown tomatoes and basil to make Panzanella. Traditionally this tomato and onion salad  is made with chunks of stale bread but the idea letting them soak in the dressing until they were in a soggy mushy state just didn't appeal . Over the decades cooks have taken all sorts of liberties with the original recipe so I decided to create my own version by adding some croutons instead. Usually I'd bake these in the oven , but for a quick lunch I looked for a shortcut and discovered they can be microwaved (which saves power as well)
Once in the salad these microwaved croutons became slightly chewy which actually tasted just right in this recipe, so I'd happily make them this way again.
It easily serves two.It's so hot and summery here today, this was all I thought we needed for lunch. John, however snuck back into the kitchen and made himself a ham sandwich as well (with the leftover Christmas ham)
My panzanella tastes good but is very basic. You can play around with it and add any combination of sliced cucumber, peppers, black olives,  or capers. Use what you have on hand. And if anyone throws up their hands in horror and tells you this is not how a true panzanella should be ignore them and eat up.

In a salad bowl put:
5 medium sized tomatoes ( ripe but still firm) cut into chunks
1 medium sized red onion (sliced)
20 leaves of basil (not too finely sliced/torn)
Dress with a  mixture of 4 tablespoons of olive oil and 1 tablespoon of balsamic vinegar

In a small microwave jug or bowl melt 1 tablespoon of olive oil with 1 tablespoon of butter
Add 1 clove of crushed garlic  and a little salt
Toss 1 1/2 cups of white bread cubes in this mixture
Add 2 tablespoons of finely grated parmesan cheese and toss again to mix well
Microwave uncovered in a single layer on a microwave safe dish or plate for 1 minute on High.
Stir and then continue to microwave.
At 30 second intervals stir them again. Continue until the bread is golden and crisp.
This could take up to 3 minutes in all

If they are not entirely crisp ( and mine weren't ) they will crisp up more on standing.

Leave the croutons to stand for a mintue or so before tossing through the Panzanella Salad. Serve at once.