Baked Ricotta with Cumin and Oreganum. 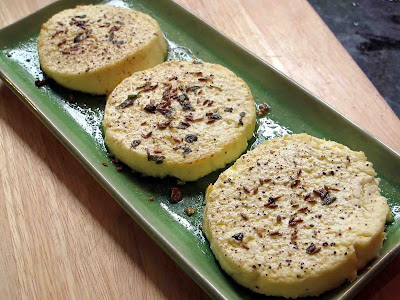 Making Ricotta cheese at home is immensely satisfying and easy as I discovered when I  tried the recipe from the Mad Millie's Italian Cheesemaking kit which my daughter Rachel gave me as a present. She knows how much I love cheese. The ingredients are few : 2 litres of whole homogenised milk, 1 teaspoon of salt and 1 heaped teaspoon of citric acid dissolved in a tablespoon of water. The recipe makes 400 grams of fresh ricotta.

The kit comes with a little draining basket which you line with a double thickness of butter muslin . It doubles as a mould. I wanted to make a reasonably firm ricotta so  as the cheese was draining I put a heavy preserving jar on top.I pressed it for several hours so it was firm enough to slice and use in this simplified version of a recipe from Peter Gordon's new cookbook Everyday ( another, already well thumbed, Christmas present).

His slices are thinner but I wanted to use them for a vegetarian dinner rather than an appetiser so made them thicker and more substantial. He uses dried thyme. I had fresh origanum. He adds a little finely grated Parmesan cheese. I had run out but may well do this next time. He adds smashed peas which aren't really to my taste. He served them cold but we liked them hot.

But I think it's a brilliant recipe to play around with. There are many other recipes I can't wait to try in this book.

Cut the ricotta cheese into three rounds.
Stir the origanum and cumin into the olive oil. Season to taste.
Spread over the ricotta rounds.
Bake at 190C until they begin to colour. This will take about 20-25 minutes.
Serve at once with some baked tomatoes and a little mesclun salad tossed with some basil leaves alongside..

Halve the tomatoes. Dribble with a little olive oil. Sprinkle with salt and freshly ground black pepper. Bake alongside the ricotta rounds.