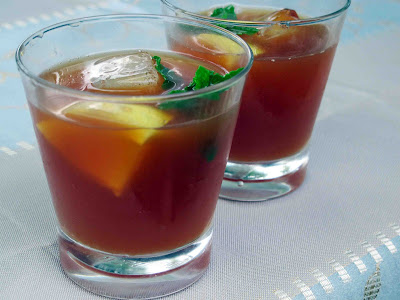 Madhur  Jaffrey tells us that iced tea which is really an American lemonade was invented on a very hot day in New Orleans at the turn of the century. She feels that " the delicate aroma of the tea is less important than the tang of lemon and the clink of ice cubes in a long glass."so finds perfectly acceptable to use good quality teabags instead of loose tea and it's very convenient.

In my experience there are good tasting teabags and some which taste more like sawdust . I played it safe and did use some very good  Dilmah single origin ( 100 percent Ceylon) teabags which came without tags. And this flavoured  the tea really well.

She heated her sugar syrup but I simply added some castor sugar to boiling water and a really good stir dissolved the sugar crystals.

I really liked her idea of serving some simple syrup separately so everyone who drinks it can have control as to how much sweetness they want to add.

Madhur quartered rather than sliced the lemons which made it easier to squeeze some of the juice into the glasses .

Instead of using a sugar syrup I tried adding some Heilala Vanilla syrup and we loved the vanilla flavour this imparted.

I have also played around with adding fruit flavours by dropping slices of ripe ( but no too ripe) stonefruit ( nectarines or peaches or plums) into the tea at the same time as I added the teabags. This added a light fruity flavour.

There are probably all sorts of differeent flavour combinations, but I would always include some teabags, a sweetener, lemon juice and a sprig of mint.

To serve:
Put one/two iceblocks in each glass
Pour the iced tea over the top
Add a squeeze of lemon juice
Add a sprig of mint
Decorate with a lemon slice

Pass the sugar syrup separately so each person can sweeten their tea and add more lemon juice to their own taste. 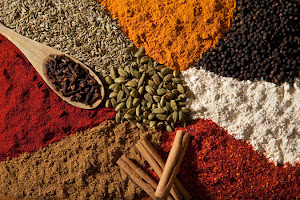