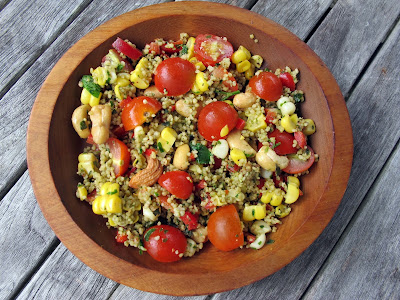 I was watching Peter Gordon on Maori Television making a couscous recipe last weekend and was reminded that it is better just to use cold water to make couscous. Most recipes use boiling water but this can make it gluggy.

I also liked the way he blitzed his herbs in a little oil in a food processor which saves a lot of chopping. It inspired me to create my own couscous recipe using a bunch of fresh herbs (which seem to be overtaking our vegetable patch and needed culling) and some of our abundant cherry tomato crop. With some red pepper and yellow sweetcorn added in as well it turned into a bright rainbow salad.

To make it I poured 1/2 cup of cold water over 1/2 cup of couscous and left it standing for about 20 minutes. The couscous had absorbed the water and was al dente by then (not too hard, not too soft)

In the meantime I blitzed a generous cup full of herbs  (a mixture of parsley, mint, oreganum and basil) in a food processor in 4 tablespoons of extra virgin olive oil until they were reduced to a textured green sauce.

I stirred this into a dressing made from:

2 tb-3tb of peanut butter ( I used Purebread peanut butter which is lightly roasted and blended with virgin coconut oil from Samoa)
1 teaspoon of sesame oil
2 tb of rice vinegar
1 tb of ponzu (made by Ceres Organics, A light citrusy flavoured soya sauce)
1 clove of peeled smashed garlic
1/4 of a finely chopped and deseeded red chilli pepper (or more if you like it fiery)


When the couscous was ready  I added

And mixed the dressing through. Time to season with salt and freshly ground pepper and sharpen it with a generous squeeze of lemon juice.

And there it was, a meal in a bowl. No standing over a hot stove for this one so just right for the hot humid weather Auckland is turning up all too often this summer.