A really Good Loaf of Bread 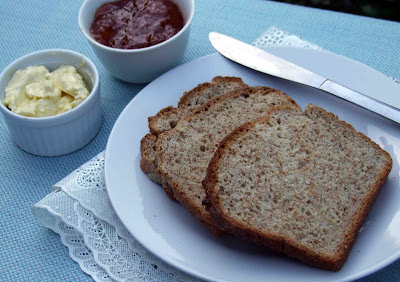 My favourite bread recipe is one that has been perfected by one of my sisters for over 25 years.

It’s a healthy loaf as it’s half wholemeal, with the added goodness of bran and milk powder. Not too dense, with a good crust and an excellent flavour. So why does it taste so good? Her opinion:

“I think the key is using malt-and a little butter. In all my other baking I use olivani, but for this loaf butter gives a better flavour. The other important thing is to use Surebake Yeast (a blend of active dry yeast and bread improvers). I developed my recipe to include this to replace the common yeast we used to use-and which required the sponge phase. My bread is now so easy!”

A Bread maker takes all the hard work out of baking a loaf. Once the ingredients are in it’s on the way with the push of a button. It’s also an energy efficient way of baking as it uses less power than an oven.

But I don’t have one, and as bread is not something I make every day, I prefer to make it by hand. I like the rhythmic kneading; the feel of the dough as it changes from sticky to silky, punching it down again after the rising, and shaping it by hand.

The recipe suggests kneading for five minutes, but I give it ten. The kneading develops the gluten in the dough and it’s this gluten, or wheat protein, which makes the bread rise. So a well kneaded loaf will be lighter. You don’t want a brick!

Instead of putting the tins in hot water in the sink I sometimes put the dough in the fridge and let it rise slowly for most of the day. Or if I start it off in the evening it can stay in overnight. The cold temperature will not kill off the yeast and it improves the flavour.

The one ingredient for this bread that I was unfamiliar to me was Maltexo. Maltexo originated in Dunedin at the turn of the Century so has been around for a while. Essentially it’s a malt extract made from New Zealand Barley. It is turned into a concentrated syrup through controlled germination and brewing processes. For decades kiwi Mums used to feed their kids a regular spoonful of Maltexo as well as using it in their baking.

Whole wheat bread mix
(I prepare up to twelve bags of this mix at a time and keep them in a cupboard. Using them means you need to allow only a few minutes to set up the bread maker. You don’t, of course, need to use a bread maker. I used this recipe for 20 years before I had a bread maker. If you choose to make it by hand, put all the ingredients (including those listed under the directions) in a bowl and mix by hand, kneading the dough for five minutes at least( great fun to do with grandchildren!) – leave to rise in a greased bowl until double and proceed as from step 5.

In each bag put:

To make bread:1. Into bread maker (in this order) put 2 T Edmonds Surebake active yeast mixture, 1 packet of the flour mix, 2 T butter
2. Add 1 cup cold water
3. Put 1 rounded tablespoon malt extract (Maltexo) in a cup, fill with boiling water and stir till dissolved. Add to bread maker
4. Set bread maker to whole-wheat bread/ dough (At this stage you can choose to complete the entire process in the bread maker – in which case you should choose the whole wheat bread/ bake option).
5. When done, take risen dough out, roll out on bench, roll up and cut into two sections. Put into greased bread tins
6. Place bread tins in sink of hot water (water to come up to about ¾ of tins) and cover tins with a cloth.
7. When risen to at least double in size, place in preheated 2200C oven for 10 minutes, then reduce heat to 1800C for another 16 minutes.
8. Turn out on to rack and leave to cool.
This bread also freezes really well, especially if you wrap it and put it in the freezer while still slightly warm.

The recipe also makes great rolls – at step 5 make into rolls and place on greased tray. Raise as for bread
Posted by Shoot and Eat at 01:23