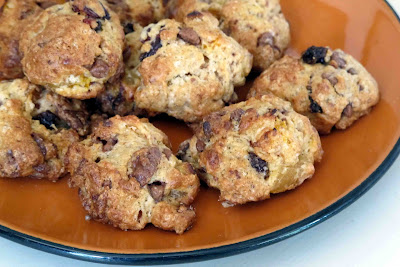 This recipe was first published in my fortnightly column in" The Breeze Auckland,"

There is still time to decide whether to go for an elegant Gentleman's Tiffin Afternoon Tea at the Langham Hotel on Father's Day or baking some treats at home. The Langham will be serving bite sized beef sliders, fish and chips, roast beef with yorkshire pudding, mini pork pies with piccalilli, and rum and fruit cake. To drink, a boutique wine or beer or a cup of tea. Sounds delicious!

At home rock cakes would make a perfect afternoon tea for Father's Day. Not just because Dads rock or because Harry Potter was partial to them, but they are very easy for kids to make for their Dads.

This is my updated version of the Edmond's Rock Cakes recipe. Although  currants were traditionally used I decided to make them more indulgent so instead added chocolate chips and a mixture of dried fruit. I also substituted brown for white sugar.The cinnamon adds a hint of spice but this is optional.The result was a plateful of very moorish little treats.

1 cup of selfraising flour
50gm butter ( straight out of the fridge and cut into cubes)
1/4 cup of brown sugar
1/4 cup of chocolate chips
1/2 cup of mixed fruit ( I used a mixture of chopped apricots, raisins and cranberries)
1/2 teaspoon of cinnamon ( optional)
1 egg beaten
2 tablespoons of milk

Put the flour and butter into the food processor.
Whizz until the mixture looks like coarse crumbs.
Tip the mixture into a large bowl
Stir in the  brown sugar, mixed fruit, chocolate chips and cinnamon.
Add beaten egg and enough milk to make a stiff dough.
Place on a bakign paper lined  oven tray in small rocky heaps
Bake at 200 degrees C for 10-12 minutes until they are golden brown,
Watch carefully towards the end to avoid burning.