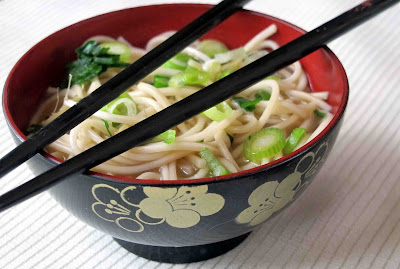 This morning I cooked the traditional noodles from Gok Cooks Chinese. The noodles are cooked briefly in a gingery broth. Then they are lifted out with tongs and some sesame oil stirred through. In the meantime a little oyster and light soy are added to the broth and it is then recombined with the noodles. Before serving some finely sliced spring onions are floated over the top.

Gok used wonton noodles. but I used a packet of handpulled Japanese wheat noodles instead and  vegetable stock, rather than chicken stock, which made it a nourishing vegetarian dish.

It is almost as fast as instant noodles, and with none of those nasty chemicals and preservatives which some of these contain.

This is a very comforting dish . As Gok says " If this dish had arms it would wrap iteslf around you and give you a hug."
Posted by Shoot and Eat at 15:09