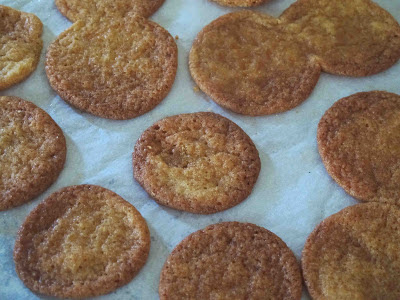 Some biscuits. like people, just need their own space. That's just how these gingernuts are. Leave plenty of room between them as they bake or they'll spread out and stick to their neighbours.

Still, even the conjoint ones tasted really nice once they'd been broken apart and just as I remembered them from Nick's Playcentre days. Crisp at the edges and a little chewy in the middle, they came from his friend Robert's Mum.

Melt butter in pan
Remove from heat and add sugar, golden syrup and beaten egg.
Mix until well combined
Sift flour and ginger into bowl
Pour in butter mixture
Mix until combined
Allow to cool a little
Roll teaspoonfuls of mixture into balls
Place well apart on lightly greased oven trays
Bake in moderate oven for about 12 minutes till they are golden brown.
Watch carefully towards the end of the cooking time to make sure they don't burn at the edges.
Makes approximately 45
Posted by Shoot and Eat at 16:32