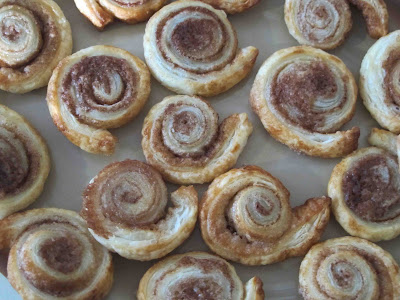 "Baking can be a bit like a painting, if you  make a mistake you can often cover it up with icing or rename it,"  I said to  Becky when her cinnamon sugar swirls unfurled in the oven. Just call them snails.

She had  booked in a baking session with me to make something nice to take for a shared lunch at school. These crisp and sweet little morsels are so esay that a 10 year old can make them herself.

We used all the 5 sheets in an "Edmond's Sure to Rise Flaky," pastry packet. This made several dozen. More than enough for kids to snack on for afternoon tea as well as having plenty to take to school the next day. You can make less of course.

For the filling start with 3 tablespoons of melted butter, and a mixture of 2/3 cup of castor sugar and 3 tablespoons of cinnamon. If these run out just mix up more but keep the same sugar-cinnamon proportions.

The glaze makes them shiny.

The Filling ( for 2 sheets)

1 egg lightly beaten with a fork, mixed with 2 tablespoon of water

Preheat the  oven to 180 degrees
Peel off each sheet but leave it on its plastic backing.
Brush it all over with melted butter, using a pastry brush
Sprinkle a layer of cinnamon sugar over , leaving a 2 cm border at one end.
Press the sugar and cinnamon mixture on with your hand.
Brush the border with water.
Roll the pastry into a cylinder  and press the edge to seal the seam
Cut into slices (3/4 cm thick) with a sharp knife
Line oven trays with baking paper.
Arange the snails on them a little distance apart
Use a pastry brush to brush with the glaze.
Bake at 180 degrees C 12-14 minutes until they are golden brown.
Lift with a spatula and cool on a rack.
Serve while hot, or store in a tin for a day or two when cool.