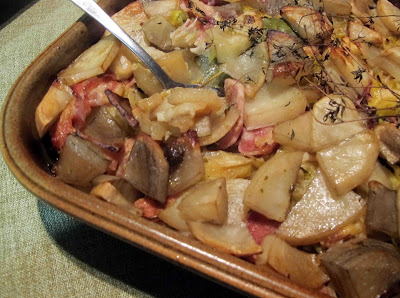 Maybe it's the Dutch in me but I love potatoes. Although not as much as some! Many moons ago,when my daughters Rachel and Kate were little, I took them back to Friesland to the village I was born.
Our hosts had boiled a whole pot of potatoes for us and were greatly surprised when we only put one each on our plates.
In those days potatoes were thought to be fattening, but our Friesian potato eating friends  (who kept a large supply of them in their cellar to see them through the winter) all looked healthy and trim. The fact is that a potato is no more fattening than an apple and has lots of nutrients. Of equal importance is their sustainability for the planet.

The Great Potato Challenge was created to celebrate the United Nations International Year of the potato in 2008. A collection of winning recipes was published in a little booklet which I found while I was browsing in the Takapuna Hospice Shop last week. This is one of the recipes and was created by Chef Tony Smith from the Crown Plaza in Christchurch.

The original recipe was for 10 which is more than I usually have around for dinner. I halved it, but it could easily be doubled again so it would be a really easy dish to cook for a crowd.

Winter has set in here. But thyme, parsley and bay leaves are still to be found in our garden. And a large bag of all purpose potatoes was at hand in the kitchen.

It turned out to be tasty and moist, the kind of comfort food which when eaten in moderation won't linger on your hips. I'd definitely make it again.

Heat the oven to 180 degrees C
Heat a heavy based pan, add bacon and stir fry
Add the leeks and cook until softened
Place half the potatoes in a baking dish and sprinkle over the leeks and bacon.
Layer remaining potatoes on top and pour the stock to almost cover the potatoes.
Place the bay leaf in the potatoes.
Sprinkle over the thyme.
Season with black pepper and drizzle with olive oil
Cover with foil and place in the preheated oven for about 40 minutes
Remove the foil and cook for a further 20 minutes until the potatoes are soft and golden.
Remove the bay leaves.
Serve with parsley sprinkled over the top