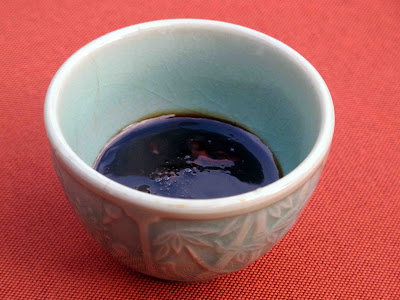 Last week I posted my recipe for a pear, gorgonzola and sticky walnut salad. In this recipe balsamic apple glaze was a crucial ingredient.

Then I discovered that my local supermarket no longer stocks it. I put my culinary thinking cap on and made my own version.

Bring these to the boil in a saucepan and simmer until the liquid is  reduced by half . It should coat the back of a spoon.

Be careful not to let it reduce too much. I did the first time and although it looked syrupy when I poured it into a small ceramic bowl it became too thick and glue like as it cooled. However it was easily rescued by dribbling a little water over the top, putting it in the microwave for a few seconds and giving it a stir. This brought it back to a syrupy consistency.

It was good as it was, but I'm going to play with it a little more, Next time I might reduce the honey a little, or substitute brown sugar.

For dinner I made a marinade of 1/2 balsamic apple glaze and half vegetable oil and brushed it over some pork chops before baking which kept them moist and added flavour.