Mea'ai Samoa : Recipes and Stories from the Heart of Polynesia 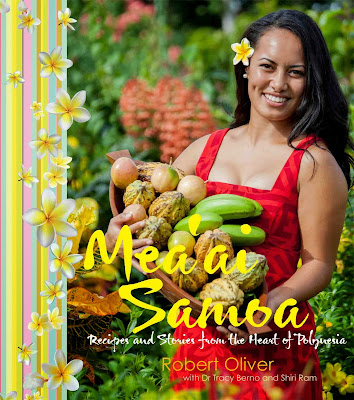 "Come to Samoa for its beaches, it's crystalline blue Pacific waters and stunning mountain landscapes, come for its sleepy relaxing nature and to laugh and laze in its endless tropical warmth but make sure you also come for the food!" enthuses Robert Oliver in Mea'ai Samoa ( Recipes and Stories from the Heart of Polynesia).

This book is a follow up from his hugely successful Me'a Kai – a South Pacific cookbook which won Best Cookbook in the World in the 2010 Gourmand Cookbook Awards.

I was captivated by the gorgeous photographs of the scenery, people and food as well as the stories. They brought back many happy memories of a week we spent in Samoa in the early nineties.

We stayed at the legendary Aggie Grey's Hotel set up for the troops in WW2. It was a great holiday. Only the food was mediocre. But times have changed. Robert tells us that:

"When tourists first arrived in Samoa they preferred European style foods like ham and cheese sandwiches. These dishes were foreign to local chefs. "This was tantamount to an Italian chef being asked to make sushi." and most of the ingredients had to be imported."

But nowadays when tourists visit a country they want to sample the local cuisine as part of the cultural experience. This has helped to fuel a culinary revolution in Samoa. "Chefs and cooks are realising with pride that their cuisine, their rustic home cooking, their lovely way of sharing, their umus and sapasuis, their superb farmers and markets is not only world class, it is in a class of its own."

Until I read his book I had never given much thought to the fact that if we as tourists choose to eat local food this has a flow on effect on the economy and creates higher incomes for farmers and fishermen. An added bonus for tourists in Samoa is that almost all the food is organically grown so it is chemical free and healthy.

Great food can be found in Samoa but only if you know where to look. This book  includes a comprehensive list of where the locals like to eat and where to attend fia fia nights which always feature signature Samoan dishes. A map is provided as well as the best kinds of food to order at each place.

But you don't have to visit Samoa to enjoy Samoan Cuisine. There is a wealth of recipes in Mea'ai Samoa to try out at home, both traditional village food as well as recipes for contemporary dishes created by Samoan chefs who live there or in New Zealand. This food is a far cry from the fatty food which has given Samoan food in New Zealand a bad name. Here are some of my favourites:


Three of the most well known and loved Samoan dishes are included: Sapasui (Samoan Chop Suey), Panipopo (deliciously sweet yeast raised Coconut Buns doused in coconut cream) and Palusami (made with young taro leaves, onion and coconut cream). If you can't lay your hands on fresh coconuts and taro leaves for the Palusami, silverbeet leaves and a can of coconut cream can easily be substituted.


From the Pacific Jewel Café in Apia comes a very healthy salad which includes sushi-grade tuna, red onion, cherry tomatoes, watercress, lettuce, cucumber and capers. It is tossed with a lemony dressing.

Dora Rossi from Paddles Waterfront in Apia has put a spin on a classic date pudding by substituting the dates with dried bananas.

Beatrice Faumuina shares her mother's recipe for coconut jam. It is easily made from three ingredients (coconut cream, raw sugar and lemon or lime leaves) She likes to spread this as an indulgent treat on a sliced baguette or over ice-cream while it is still warm.

After reading Mea'ai Samoa I'd love to hop on a plane to revisit Samoa and follow the exciting culinary journey which Robert Oliver and his team have mapped out for us. I would heartily recommend it to anyone who is planning to make a trip over there and to all cooks who would like to explore the best of Samoan Cuisine.

Title: Mea'ai Samoa: Recipes and Stories from the Heart of Polynesia

This cookbook review was first written for my regular column in Grownups
Posted by Shoot and Eat at 14:56